The non-profit Vilcek Foundation has created a manga comic starring Zambia-born South African architect Denise Scott Brown as part of its mission to raise awareness of immigrants' contribution to the US.

Scott Brown is the subject of the first in a series of manga comics that will be made about the lives of the non-profit organisation's Vilcek Prize winners.

The pioneer of postmodern architecture was one of the first winners of the prize in 2007.

The comic illustrates her childhood in South Africa through to her career in the US and the difficulties of being recognised in a field dominated by men.

"We chose to engage manga for its fresh and accessible approach to storytelling," said Vilcek Foundation president Rick Kinsel.

"Manga, at its best, has an ability to convey subtle, nuanced, and abstract story lines," he told Dezeen. "The visual format allows us to share complex and notional ideas in a concise manner."

Kinsel chose to begin the series with Scott Brown as she stood out to him as a "kind, wise and benevolent" figure and the foundation hoped her story would translate into the format well.

"The concept for a manga came out of a long conversation I had with Denise last summer, when she was in isolation due to the pandemic," Kinsel said.

"We wanted to document elements of Denise's story and legacy that go beyond her teachings and her constructed works, and delve into her approach."

"Real life is not a comic book!"

The series was made together with artist and illustrator Hiroki Otsuka, who had created short biographies before but said it is always a challenge.

"Real life is not a comic book!" he told Dezeen. "I learn to listen to the parts of a person's story that are more fantastical and imaginative. That's the seed of a good manga."

Speaking to the architect herself was "mind-blowing," Otsuka, who hadn't heard of her work before starting the project, said.

"The Vilcek Foundation were so good at getting us her books and background materials. Then they arranged an interview – and that was mind-blowing!"

"When you talk to Denise Scott Brown, all of her ideas about architecture and cites and life just come flooding out. She's a genius. At 89, she hasn't stopped," he added.

The manga series shows some of Scott Brown's most famous work, created together with her husband Robert Venturi as Venturi, Scott Brown & Associates. Examples include the Sainsbury's Wing of London's National Gallery and the Nikko Kirifuri Resort in Nikko, Japan. 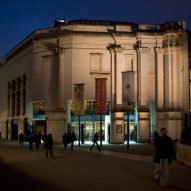 It also showcases Scott Brown's and Venturi's seminal book Learning from Las Vegas, which celebrated the everyday landscape of the gambling epicentre in the Nevada desert.

Otsuka chose to illustrate these examples of Scott Brown's work in a "near-photographic" style.

"Modern manga exists in a range of styles," he said. "Some combine traditional character styles with near-photographic images. That felt like the right approach for showing the buildings and spaces that Scott Brown created."

The Vilcek Foundation's mission is to recognise immigrants whose artistic, cultural, and scientific contributions make society better, and its Vilcek Prize is given out annually to immigrant artists and scientists.

"The diversity of stories, experiences, and perspectives of our foundation's prizewinners exemplify that there is no single 'immigrant story,' but each individual story is a part of our larger American story," said Kinsel. 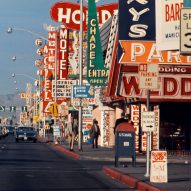 Photographs by Denise Scott Brown on view in New York

Scott Brown herself was "delighted" by the manga of her life he added. "Denise reached out last week to express her gratitude, and to share her delight in the manga as a portrait of her life and work.

Scott Brown won the Jane Drew Prize for women in architecture in 2017. In 2016, the American Institute of Architects named her and Venturi the 2016 AIA Gold Medal laureates, giving them the joint recognition that Scott Brown missed out on when she was excluded from the 1991 Pritzker Prize, which was only given to her partner Venturi.

All images by Hiroki Otsuka for the Vilcek Foundation.