The winners of the AHEAD Global hospitality awards describe how the programme has brought the industry together during the coronavirus pandemic in this video produced by Dezeen for AHEAD.

The AHEAD Global awards, which celebrate striking hospitality projects from around the world, announced its winners in a livestream that was broadcast on Dezeen in December.

The event was the culmination of a two-year programme of events split into four different regions: Europe, Middle East and Africa (MEA), Asia and the Americas.

Throughout last year, the physical ceremonies that AHEAD usually hosts to announce the winners were replaced by a series of live-streamed versions broadcast on Dezeen in response to the coronavirus pandemic.

"There's a massive wealth of diversity within the hospitality industry across the globe," says AHEAD's Amy Wright in the video.

"AHEAD global brings together the winners of all the regions from across two years to compete to be the best of the best," she said. 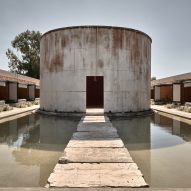 According to the winners, the awards programme has offered hoteliers and hotel designers a sense of community while the hospitality industry struggled in the face of the global travel restrictions put in place to combat the spread of Covid-19.

"Ahead awards brings the industry together," said Amar Lalvani, CEO of Standard International, whose Standard Hotel in London won the Social Scene Award.

"In the year of the pandemic when people are so far apart, to bring industry people together and recognise the hard work that our teams do to bring projects to life means more now than it ever did," he continued.

Dexamenes Seaside Hotel in Greece took home the AHEAD Global Ultimate Accolade, the most significant award of the event.

The project is a conversion of an abandoned wine factory on the Peloponnese coastline by Athens-based practice K-studio, and makes use of the industrial character of the site.

"Dexamenes is a wonderful example of the creative reuse and regeneration of a derelict building," said Wright. "It's a perfect example of what hoteliers can and should be doing more."

Amongst the other projects commended at the event was Amanyangyun, a resort hotel in Shanghai designed by Kerry Hill Architects and winner of the Regeneration Award.

Amanyangyun incorporates 10,000 Camphor trees as well as 50 historic buildings from the Ming and Qing dynasties that were transported 600 kilometres from a site where they were under threat from the construction of a new dam.

The Wild Coast Tented Lodge in Sri Lanka won The Gamechanger Award, an accolade given to a project that challenges established norms in the hospitality industry.

Its dome-like dwellings were designed to mimic rocky outcrops scattered across the local landscape.

"It celebrates the flora and fauna and culture of the area with minimal intrusion in the natural landscape," said Olav Bruin, creative director at Nomadic Resorts.

"We have chosen to go with the concept of rounded huts with thatched roofs the way the local Owambo tribe has been building their houses for years and years" explained Arnaud Zannier, founder of Zannier Hotels.

"Using Santa Monica as a muse, our designer Kelly Wearstler took most of her cues from classic Santa Monica history with a design-forward sense of luxury."

The Urban Award was given to Rosewood Bangkok, a 159-room, 30-floor tower with an angular form based on the Thai custom of pressing one's hands together in greeting.

"The atmosphere is very contemporary - timeless, I would say," stated Michael Kaesemann, executive assistant manager of rooms at the hotel.

The hotel's designers brought the features of its otherworldly natural surroundings into the building, using lava as a building material and prioritising views of the landscape throughout.

"The key characteristic of The Retreat at Blue Lagoon is this relationship between the man-made, the building, the interior and exterior, the nature," said Sigurdur Thorsteinsson, brand strategy director of the Blue Lagoon complex.

"The whole project evolved around how to get the feeling of nature flowing into the building."

The hotel occupies the fourth floor of a residential tower, with rooms that look out over a garden sculpted to resemble sand dunes.

"Though it is on the fourth floor of a building, we manage to make believe that this whole place is hidden in the dunes next to the ocean," explained its designer Anda Andrei.

In March last year, Dezeen broadcast a ceremony announcing the winners of the AHEAD Asia 2020 awards, after the physical event was called off following the outbreak of the coronavirus pandemic.

The winners of the AHEAD Americas 2020 awards were streamed in June 2020 as part of Dezeen's Virtual Design Festival. In November, Dezeen broadcast ceremonies announcing winners of the MEA and Europe legs of the competition.