UK prime minister Boris Johnson has proposed connecting England, Scotland and Northern Ireland via tunnels connected to a giant underground roundabout beneath the Isle of Man.

The roundabout, nicknamed the Douglas Junction after the Isle of Man's capital, would be accessed by two tunnels from England, one from Scotland and one from Northern Ireland, reported The Times.

It is envisaged by Johnson as a way to improve links between Northern Ireland and the rest of the UK post-Brexit and follows his backing of a single 40-kilometre-long crossing from Stranraer in Scotland to Larne in Northern Ireland in 2018.

Tunnels would meet below Isle of Man

If built, the Douglas Junction would be connected to Belfast in Northern Ireland, Stranraer in Scotland, and Heysham and Liverpool in England.

It would be built below the Isle of Man – a large island in the Irish Sea that is located between the islands of Great Britain and Ireland.

According to The Times, the tunnel system and roundabout were suggested as the plan avoids crossing  Beaufort's Dyke – a trench where ammunition from the second world war was dumped.

This 50-kilometre-long fissure is cited as one of the main hurdles to building the single crossing between Scotland and Northern Ireland.

The conduction of a feasibility study for the latest plan is expected to be given a green light in the next few weeks, however, the idea has so far been met with scepticism.

Proposal "does not sound credible"

This includes comments made by Scottish architect Alan Dunlop, who first proposed the idea of a crossing between Northern Ireland and Scotland in 2018, now dubbed Boris' Burrow.

"The reporting on the prime minister proposing a roundabout under the Isle of Man does not sound credible," Dunlop told Dezeen. 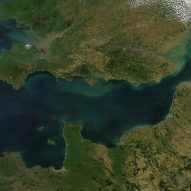 "If it is true, then I cannot think why Boris Johnson would say that at a time when there is so much criticism being levelled at the so-called Boris' Burrow in much of the media," he continued.

"It only serves to undermine that which I know to be structurally, technically and physically achievable: a tunnel or bridge that connects Scotland with Northern Ireland."

According to the Sunday Times, a source said the "roundabout is round the bend" and "exists primarily in the mind of the prime minister".

Along with several proposals for crossings to connect Northern Ireland with Scotland, Johnson proposed a 35-kilometre-long bridge between Britain and France in 2008.

The idea, labelled Boris Bridge, was met with ridicule from a number of industry figures, including Dunlop who said it would be easier to "just move France closer" than building a bridge.

Main image is by NASA via Wikimedia Commons.