The 37,000-square-metre library, located in the city of Tainan, houses over a million books, alongside collections of music, films and modern art.

Its palatial, staggered form was designed by Mecanoo and MAYU Architects to pay homage to local vernacular, including the city's old temples with cantilevered roofs.

"The oldest city in Taiwan, Tainan has a rich history influenced by different cultures," explained Mecanoo.

"There are remnants of maritime trade with Europe in the 17th century, of the Chinese Ming Dynasty and Japanese settlements from the beginning of the 20th century."

"The city is rich in temples, including the famous 17th century Confucius Temple with its cantilevered roofs and beautifully carved ceilings," added the studio.

"The new library takes from this history, is inspired by the local culture and has been designed for the tropical climate of Tainan."

From afar, Tainan Public Library is distinguished by its large, overhanging upper floor, which is enclosed by aluminium panels adorned with ornate, floral cut-outs.

According to Mecanoo, these panels are modelled on "latticed windows in the old town" and are designed to filter out light and heat during the day while illuminating the building at night.

While referencing local vernacular, the staggered exterior of the building also creates a series of sheltered, outdoor spaces, including four sunken patios for outdoor events.

Here, the slender columns that support the upper floors are arranged in groups of four and are intended to give the feeling of walking through a bamboo forest.

These stand alongside exhibition spaces, a theatre, offices and maker spaces, as well as a study room that is open twenty-four hours a day.

Entering the building, visitors are greeted by a large atrium that is overlooked by each floor.

Overhead is an installation by UK designer Paul Cocksedge that is composed of suspended sheets of paper, symbolising "freedom of thought and the pleasure of reading". 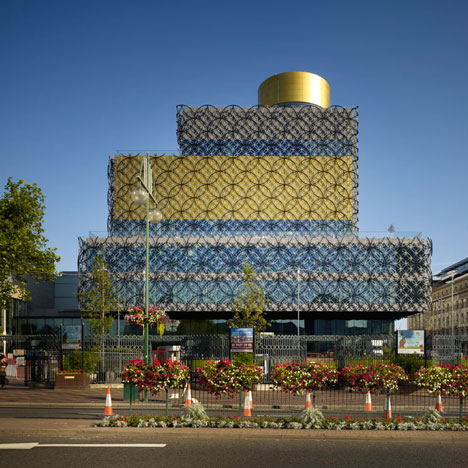 Library of Birmingham by Mecanoo

The atrium and surrounding ground floor spaces are dominated by a wooden material palette, designed to feel warm and welcoming.

On one side, revealed through openings in a slatted wall, is a contrasting sculptural staircase that is painted bright red. This is a centrepiece within the building, visible from each level.

The upper levels of the Tainan Public Library have bolder finishes, including bright yellow floors with contrasting black furnishings and circular pendant lights.

The first space visitors pass through is the multimedia library, which is filled with seating and cosy alcoves to watch the film collections. Above are the general and heritage book collections, with links to the roof gardens the complete the building and provide uninterrupted views over the city.

Mecanoo was founded in the Netherlands in 1984 by Dutch architect Francine Houben. Its collaboration with MAYU Architects on the Tainan Public Library follows its recent completion of a giant red cultural centre in Shenzhen that comprises an art gallery, science museum, youth centre and bookshop.

Mecanoo also designed a city library in Birmingham, England, which also has a distinctive stepped form and an ornate facade clad with metallic rings that nod to the city's jewellery quarter.

Elsewhere, the studio is currently developing a proposal for a copper-coloured tower alongside Frankfurt station as well as a sinuous maritime museum for Rotterdam harbour.

Photography is by Ethan Lee.