Mecanoo has released visuals of Frankfurt Grand Central, a residential complex in Frankfurt, Germany, that will feature a copper-coloured tower.

Delft studio Mecanoo won a competition to design Frankfurt Grand Central for Phoenix and Gross & Partner, which is developing the scheme close to the city's Central Station.

It will be distinguished by its 40-storey tower, which is wrapped in copper-coloured metal to echo the "industrial atmosphere" of the railside site.

"The past few years have seen the beginnings of a transformation of the area," explained the architecture studio.

"The arrival of the new residential tower will be an important impetus for the transformation of this currently business-focused area into a mixed neighbourhood for living and working."

Alongside the 140-metre-high tower, Mecanoo has designed an eight-storey block for Frankfurt Grand Central that will be wrapped in the same metallic cladding.

Together they will host a mix of social and private housing, and be joined by a glass-walled "plinth" at ground level. 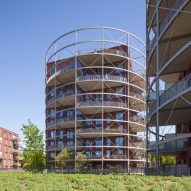 While the smaller block will be dedicated to affordable housing, the tower will host social housing on its seven lowest floors, and private units and penthouses on the upper levels.

The form of the tower will gradually change in accordance with these different property types, as Mecanoo has designed them each with differently sized and positions of balconies.

Frankfurt Grand Central will be complete with a subterranean carpark, and a mix of workspaces, retail and catering facilities, as well as a gym and kindergarten inside the glass plinth.

Mecanoo will also incorporate a public square and a linear park that extends to the Central Station to create a "lively public space" that will connect the area with the existing neighbourhood.

Mecanoo's Frankfurt Grand Central proposal follows a number of other high-rise buildings designed for the city since it embarked on a "Brexit building boom" in 2017.

The city is bidding to woo banks from London by building dozens of new high-rise towers, including a state-of the-art office block by BIG and a luxury apartment block that Buro Ole Scheeren.

Mecanoo was founded by architect Francine Houben in 1984. Other recent work by the studio includes a giant red cultural centre in China, the world's largest performing arts centre, and a glass house on a lake in the Cotswolds.