Casa Cova is located in Puerto Escondido, a coastal town in the Mexican state of Oaxaca. Designed by Anonimous, which is based in the city of Querétaro, the building serves as a holiday home for two families.

The project's design was influenced by the massive chambers and private passageways found in the region's pre-colonial architecture. The firm drew particular inspiration from the Mitla archaeological site, which was first inhabited by the Zapotec people over 800 years ago.

U-shaped in plan, the 1,287-square-metre holiday home consists of a central volume and two parallel arms that reach toward the sea. The central element holds a shared public zone, while the side wings encompass sleeping areas for each family.

The building is lifted 1.5 metres off the ground in response to flooding that can occur in the area. Walls are made of structural concrete, a material chosen for its durability.

"The constant intensity of the sun and the salinity of the place demanded a material that ages finely without the need of much, if any, maintenance," the team said.

The home is accessed through the central volume, which has two entrances that pass through a wall with tiny, square openings. In addition to facilitating cross ventilation, the openings create "a dynamic light pattern from dusk till dawn". 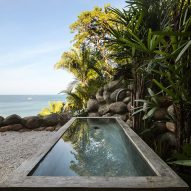 The central area encompasses a living room, dining area and a bar. The lofty space is topped with a 30-metre long thatched roof made of dried palm leaves, called a "palapa."

This roof style, which draws upon the local vernacular, helps keep the interior cool by providing shade and by allowing heat to escape upward.

In addition to dried palm fronds, locally sourced materials such as golden-brown parota wood were used throughout the home.

The bedroom wings contain a master suite and two kids' bedrooms, each with their own bathroom. The rooms are linked by courtyards that user in fresh, ocean air.

At the heart of the dwelling is a large swimming pool that was "designed as a set of alternating planes." A series of cabanas provide respite from the bright sun.

Situated along the Pacific Coast, Puerto Escondido is known for its palm tree-lined beaches and surfing beaches.

Other projects there include a Japanese-Mexican restaurant designed by TAX Architects that features an open-air dining room and a large thatched roof.