Architect Tanijiri Makoto of Japanese studio Suppose Design Office has created a monolithic concrete home for himself and his family in Tokyo, featuring dark living spaces that open onto a sheltered terrace.

Suppose Design Office has so far created more than 150 houses, but its founder never believed he would be able to build one for himself due to the cost of land in central Tokyo.

Makoto was living in rented accommodation in Tokyo when he decided to start looking for an affordable plot in the city on which to build his House T.

The price of land in the Japanese capital is prohibitively expensive for most residential buyers, so Makoto originally searched for sites that were less desirable due to their small size, awkward shape or challenging topography.

Recognising the value in slightly larger sites that were still too small for commercial housebuilding, the architect devised a plan to build a three-storey incorporating two floors of commercial space that could be rented out.

Eventually, a suitable site in the Shibuya area became available and Makoto designed a building in with his home on the first floor between two floors intended for commercial use.

The building's layout and appearance are designed to be versatile so to ensure all of the spaces can be adapted to the requirements of potential future occupants.

"I designed the floor plan to be variable in the future, with the perimeter made of concrete and the interior made of wood," Makoto explained.

"I studied the building's proportions, and I made the plan and cross-sectional plans hoping that anyone could live in the house."

From the outside, the building appears as a solid mass of stacked concrete volumes.

A void at street level provides a parking space and shelters the entrance to a showroom space currently rented by a kitchen appliances firm.

Plants that tumble down from terraces on the uppers floors introduce a natural element to the facade. On one side, stairs provide access to the living spaces and a self-contained unit with a large roof terrace that currently hosts a restaurant.

The need for privacy within the home prompted Makoto to surround it with thick concrete walls. To bring warmth and tactility to the interior, the concrete surfaces are textured and complemented by natural materials and finishes.

According to the architect, the house was informed by the beauty of nature and by the townhouse he grew up in, which featured a dark room looking onto a long, narrow courtyard. 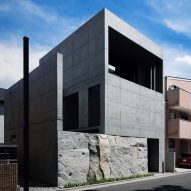 "While maintaining the sensibility of thinking back to the past, I have made full use of engineering that is possible only in the modern age and have transformed a natural environment like a cave into architecture," he said.

Openings on the dwelling level are limited to create darkness and intimacy, with a terrace lining one side of the living area providing the main connection to the outdoors.

The entrance hall leads to an open-plan lounge, kitchen and dining space featuring double-height ceilings that allow for a mezzanine level.

A timber-lined box flanking the living area contains the master suite, with its black-tiled bathroom and walk-in closet.

The bedroom features built-in bookshelves and a wooden ceiling that provides a warm complement to the concrete walls.

The same palette of robust and raw materials is used throughout the commercial spaces, which could be incorporated into the home in the future or used to continue generating income.

The use of raw concrete is familiar to Makoto, who previously applied a palette of concrete, steel and reclaimed wood when creating the interior for Suppose Design Office's Tokyo studio.

The studio's other residential projects include a house in Fukuoka that slopes down towards the edge of a reservoir, and a home in Anjo featuring a shingle-clad roof that extends out to shelter parts of its garden.

Photography is by Toshiyuki Yano, video is by Toha.