The late modernist architect Lina Bo Bardi has been named the winner of the Special Golden Lion for Lifetime Achievement award at this year's Venice Architecture Biennale.

The prize will be bestowed in memoriam to Bo Bardi in May at the 17th edition of the international festival, also known as Biennale Architettura, which is considered the most significant event in the architecture calendar.

Italian-born Brazilian Bo Bardi, who was also an esteemed designer, scenographer, artist and critic, was nominated by architect Hashim Sarkis, the curator of the 2021 festival.

Sarkis said the prize is in recognition of her illustrious career and "powerful buildings", and how these embody the theme of the 2021 edition of the biennial: How will we live together?

Bo Bardi "exemplifies the perseverance of the architect"

"Her career as a designer, editor, curator, and activist reminds us of the role of the architect as a convener and importantly, as the builder of collective visions," said Sarkis.

"Bo Bardi also exemplifies the perseverance of the architect in difficult times whether wars, political strife, or immigration, and her ability to remain creative, generous, and optimistic throughout," he explained.

"Above all, it is her powerful buildings that stand out in their design and in the way that they bring architecture, nature, living, and community together. In her hands, architecture becomes truly a convening social art."

Bo Bardi was born in Rome in 1914 and began her career in architecture after graduating in 1939. Today she is one of the most celebrated women architects of the twentieth century.

Throughout her career, which spanned between Italy and Brazil, she envisaged the role of an architect as being an "enabler of society", according to the event's organisers.

Among her most notable buildings is the São Paulo Museum, a large concrete and glass building conceived as a public space for the city, with flexible interiors intended for experimental exhibitions.

Architect Jane Hall cited the project as one of the most ground-breaking buildings designed by a woman, featuring it in her book Breaking Ground: Architecture by Women.

Bo Bardi's other key projects include her self-designed home in a tropical forest in São Paulo, the Casa de Vidro, and SESC Pompeia Factory – a giant community and sports centre.

Award will communicate her "view of the world"

Her work has become more widely recognised since her death in 1992 with the help of the Instituto Bardi, which was founded to protect and promote her archive.

"We hope that the 2021 edition of La Biennale – rather than inflate her popularity as an architectural icon – will help to even better contextualise and communicate the depth of Lina Bo Bardi’s critical view of the world: always caring for the least culturally represented, consistently aware of the importance of diversity in art and architecture, and committed to a multidisciplinary approach to architecture bringing together people from all walks of life," the Instituto Bardi said, reflecting on the announcement.

The award will be celebrated on May 22 2021 as part of the inauguration ceremony for the Biennale Architettura 2021. The event, which was due to begin on 23 May 2020, was rescheduled due to the coronavirus pandemic. 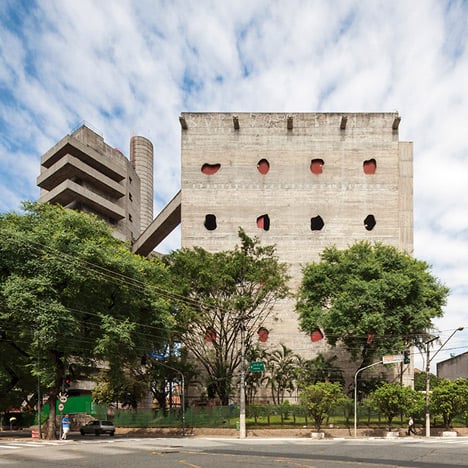 Golden Lion awards are given to architects at every festival in recognition of their lifetime achievements. Previous recipients include British architect, critic and educator Kenneth Frampton, Canadian architect and philanthropist Phyllis Lambert and Brazilian architect Paulo Mendes da Rocha.

Past winners of the Special Golden Lion for Lifetime Achievement in memorial include Japanese architect Kazuo Shinohara, who was nominated by Kazuyo Sejima in 2010.

The announcement of Bo Bardi's award coincides with International Women's Day today, for which we asked 22 of the world's most inspirational women creatives to nominate another woman who should be better known for their work.

Portrait is courtesy of Instituto Bardi.