Short Mountain House is located in the town of Maryville in eastern Tennessee.

Perched on a ridge, the dwelling has panoramic views of the national park, which is known for its rolling mountains, old-growth forests and preserved 19th-century homesteads.

Sanders Pace Architecture, based in the nearby city of Knoxville, designed the residence for a couple who often have family members visiting from out of town.

To provide enough space and privacy for everyone, the architects divided the home into three connected pavilions, which are arrayed on a rectangular site.

This configuration enables the house to be compartmentalised when guests come to stay.

To help the house blend with its natural setting, the architects clad the foundations with stone and the walls in accoya wood – both charred and naturally stained.

The blackened accoya was burnt using the Japanese art of Shou Sugi Ban, which helps increase the material's longevity.

"The heavily charred surface of the board makes the wood fire retardant, as well as resistant to rot, insects and decay," the team said.

A series of recessed patios are informed by engawas, an element in Japanese architecture where wood or bamboo flooring marks the perimeter of rooms or buildings.

When placed on the periphery of a Japanese house, an engawa acts as a porch-style transition between the home and its garden, the firm said.

The pavilions define a series of outdoor spaces around the house, including a central lawn. Their positioning also affords views of the national park. 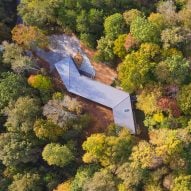 Each pavilion is a simple, gabled form that draws references to the region's vernacular buildings. Clad in standing-seam metal, the roofs are pitched in a way that takes cues from traditional Japanese architecture.

The most central volume contains the living, dining and kitchen spaces, along with an office and laundry room. Another pavilion holds the master suite and garage, which are separated by a breezeway.

A third volume encompasses a studio space and two guests bedrooms with a shared bathroom.

These pavilions are joined by corridors with floor-to-ceiling glass.

"These spaces are designed to feel like bridges spanning between the pavilions," the studio said.

For the interiors, the team used a simple palette of materials, such as painted drywall, white oak flooring and pine window trim. In the master bathroom, finishes were chosen to complement a Japanese soaking tub.

Furnishings were purchased by the homeowners, with the exception of a custom bed in the master suite created by Sanders Pace. Its design takes cues from a type of Japanese cabinetry known as a tansu.

Founded in 2002 by John Sanders and Brandon Pace, Sanders Pace Architecture has completed a number of projects in East Tennessee. Others include the French Broad House – a family dwelling composed of three connected volumes that zigzag through the forest.

Photography is by Keith Isaacs Photo.