Set along the eastern boundary of the independent school's site, the refectory block is formed of a trio of pitched-roof volumes each topped with a glazed lantern.

The timber building was clad in soft stock brick and plain clay tiles to compliment the school's original early 20th-century main schoolhouse, which it stands alongside.

"Our aim was to create a building with a timeless quality," said project architect at Maccreanor Lavington Thomas Ormerod.

"The refectory is the heart of communal life at the school and we wanted to reflect the school's strong family ethos in the building," he told Dezeen.

While the building's exterior is in keeping with the surrounding buildings and also functions as a calm backdrop for the orchard, inside the refectory has a series of grand spaces topped with a timber roof.

"One could say the building has a sense of grandeur internally – we wanted it to be a celebratory space and this informed the lofty volume of the halls," explained Ormerod.

"In contrast, externally the building is deliberately quieter and low. It sympathetically draws upon its context of the adjoining Edwardian Main House, which it has a subservient relationship with and by sinking the building into the sloping landscape, it provides a formal edge to the historic orchard."

The building's central volume contains the refectory's serving area topped with a dining area for the sixth form pupils.

On either side of this are the block's kitchen, topped with a sixth form study area, and the refectory's main dining area.

Each of the block's roofs was constructed from glued laminated timber (glulam) that is visible internally and arranged in a diamond pattern. Oak panelling was set between the glulam and used on the walls to help absorb sound in the dining areas. 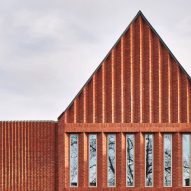 "The glulam roof timbers are working in a similar manner to a traditional timber roof, however, we have set the structure out in a diamond pattern," said Ormerod.

"The benefits of using glulam, apart from its beauty, was the structure could be prefabricated and finished off-site."

Overall Ormerod hopes that the studio has created an uplifting environment for the students to eat in.

"As architects, it is important for us to create an environment that is comfortable and enjoyable to be in – this brief felt like a real opportunity to do something uplifting," he said.

"This can be a challenge in a building that serves 1,200 meals at lunchtime to pupils aged four to 18 and to school staff," he continued.

"There is potential to create an awful lot of noise, despite this, we hope staff and pupils will notice the calm atmosphere achieved through the pared-back material pallet and extensive acoustic treatment concealed in the roof and wall linings."

Maccreanor Lavington was founded by Gerard Maccreanor and Richard Lavington in 1992 and has offices in London and Rotterdam. The studio previously added a timber-framed house to a 1960s London housing estate and co-designed the Accordia housing development, which won the RIBA Stirling Prize in 2008,