Bell Phillips has completed a red-brick extension to a grammar school in Kent, England, featuring gabled facades and architectural details that reference its historic surroundings.

The London studio headed by Tim Bell and Hari Phillips designed the new Mitchell Building for The Skinners' School in Royal Tunbridge Wells.

The school was established by the Worshipful Company of Skinners in 1887. Its original buildings were designed by architect E. H. Burnell in the Gothic revival style.

Over time, the historic buildings were joined by a collection of more recent additions in a mixture of styles. The three-storey extension is designed to bring greater cohesion to the campus and to complement the materiality and proportions of the adjacent buildings.

"The facades draw on motifs and architectural conventions from the existing Victorian buildings to forge a contemporary architectural language and create a clear visual interdependence," said Bell Phillips.

"Compositionally, the dominance of vertical proportions and strongly articulated gable ends have been utilised to reflect the approach on the Main School building," the studio added.

The extension is clad entirely in red brick to tie in with the surrounding buildings. On the facades, the bricks are laid at 45 degrees to add visual interest and continue the triangular motif found in the older structures. 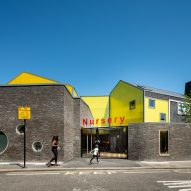 Horizontal soldier courses above and below the windows reference the stone lintels used in other buildings across the campus.

The new building is situated at one end of the school's Upper Yard, where it forms a new boundary alongside improved landscaping. A sheltered loggia creates a welcoming entrance that enhances the connection with the yard.

The extension provides 1,187-square-metre of additional floor space, accommodating a sixth-form centre, English department and library across its three levels.

A foyer provides access to the 200-square-metre sixth form centre that occupies most of the ground floor. This flexible hall contains quiet study spaces alongside more informal seating and a breakout area.

A timber-lined stairwell leads up to a first floor containing the English department classrooms. These are arranged off a central corridor with stairs at either end.

The library is situated on the upper floor beneath the building's tall pitched roof. The timber-lined ceiling adds warmth to this space, which receives natural light from windows on three sides.

The upper level also accommodates a classroom and a meeting room that adjoins the library. A calm, neutral palette is applied throughout the building, with acoustic panels helping to create a suitable environment for focused learning.

Bell Phillips Architects was established in 2004 and is based in Wapping, east London.

Previous projects include the transformation of a Victorian gas holder in London into a circular park and the addition of a red-brick social housing block to an estate in south London.