Devlin rejected the claim, saying her project is "very different" from Littmann's.

Littmann said he was "both surprised and irritated" to read about Devlin's Forest for Change project, which will see the courtyard at Somerset House in London filled with 400 trees.

He claimed that Devlin's project for the London Design Biennale is "an imitation" of For Forest, a project that saw 299 trees placed inside the Wörthersee Stadion in Klagenfurt, Austria in 2019.

"If you compare the two images – the visualisation of the installation in Somerset House and the image of the temporary art installation in the football stadium in Klagenfurt – you can see the Forest for Change project as an imitation," he told Dezeen.

"It looks like the forest in the football stadium For Forest has been moved to Somerset House," he added.

He said that people have assumed that Devlin's project is an updated version of his own work. "I simply cannot leave this misinterpretation to be unchallenged," he added.

Littmann stopped short of accusing Devlin of copying his project, but said: "Perhaps Es Devlin and her team were inspired by my project."

Littmann's forest, which was planted over the stadium's pitch from September to October 2019, was inspired by a dystopian pencil drawing by postwar Austrian artist and architect Max Peintner.

The 1971 drawing, titled The Unending Attraction of Nature, depicts a woodland in the centre of a stadium filled with a capacity crowd.

"With this installation, I wanted to challenge our perception and sharpen our view of the future of the human-nature relationship," Littmann explained.

He added that both the drawing and the installation foresaw a future time when humans will only be able to observe nature "in specially assigned locations, as it is already happening today with animals in the zoo".

However, Devlin said that her project was "quite diametrically distinct" from Littmann's.

"Thank you for bringing my attention to the extraordinary 2019 work of Klaus Littmann," she wrote in response to an email from Littmann's assistant. "It looks breathtaking."

But she added: "I think both in concept and in execution, the work at Somerset House will function, be received and look very different and distinct to the Klagenfurt work." 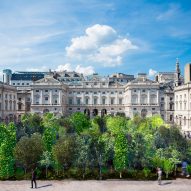 Devlin's project, which will take over the courtyard at the large central London building from 1-27 June this year, will feature trees from 200 countries set in planters.

Paths through the trees will converge at a central clearing containing a pavilion explaining the United Nation's 17 Sustainable Development Goals.

"Once you enter the Somerset House forest, it won't at all look like the images I see online of the Klagenfurt work as it will be full of interactive elements, pathways, illuminations and information about the goals," she wrote.

"In a way, I would say that the intention of Forest for Change is quite diametrically distinct from Peintner's conjecture that in the future nature may only be viewable in prescribed zones, like a spectator sport in a stadium, like captive animals in a zoo," she continued.

"The impetus behind Forest for Change was my reading of the Richard Powers novel The Overstory; a generational saga in which the trees are the protagonists while the human characters are relegated to the subplot."

Devlin added that the project was inspired by a decree issued by architect William Chambers, who designed the neoclassical Somerset House in 1776. Set beside the Thames, the Georgian quadrangle originally housed government offices but is now a cultural destination.

"Conceptually, the Somerset House project is a response to a specific stipulation by the eighteenth-century Palladian architect William Chambers who decreed that the rational symmetries of the central courtyard must never be interrupted by anything organic and specifically any kind of planting or trees," Devlin explained.

Her email to Littmann's assistant concluded: "With best wishes and thanks for your interest in the work and I would very much look forward to showing you the work in person if you are able to make it to London in June."