A new generation of compact chips could safely neutralise airborne coronavirus in buildings, vehicles and even outdoor spaces using far-UVC radiation, according to Seth Coe-Sullivan of technology company NS Nanotech.

The semiconductors, which will cost less than $200 each and can run on battery power, could play "a significant role in fighting the pandemic," said Coe-Sullivan, who is CEO and co-founder of the US nanotech company.

The potential for the technology to disinfect public and private spaces without harming people is "nearly limitless," Coe-Sullivan told Dezeen in an email interview.

The chips could also help deactivate influenza and other pathogens, potentially protecting people against future pandemics.

Called ShortWaveLight Emitter, the chips are expected to be commercially available in the second half of this year, assuming they gain regulatory approval, at a price "much less" than $200.

Designers will be then able to use the chips, which measure 40 millimetres by 40 millimetres, in lighting products and sanitising devices.

The tile-like components emit visible blue light as well as the invisible far-UVC ultraviolet light so people know when they are turned on.

To showcase the technology, the company is set to launch a desktop device called the ShortWaveLight Purifier, which contains a far-UVC chip.

This could "purify the entire personal airspace around a single user in a matter of minutes," according to Coe-Sullivan.

The technology is also "ideal for use in an automobile," he added. "One or more units can be used to help provide constant sanitization of the airspace of the driver and/or passengers."

NS Nanotech, which is based in Ann Arbor, Michigan, developed the chips last year after it read a groundbreaking research paper by professor David Brenner of Columbia University.

Technologists at NS Nanotech, which builds nitride semiconductors for LED displays, read the paper and realised its nanotechnology could also make chips that emit far-UVC.

"We realized we could quickly develop and deliver the world's first and only semiconductor that emits far-UVC light," Coe-Sullivan said.

"We got to work virtually during the shutdown developing a product that we believed could play a significant role fighting the pandemic." 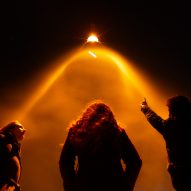 Coe-Sullivan is an entrepreneur who has a PhD from MIT and whose previous business, QD Vision, developed quantum-dot display technology.

QD Vision was sold to Samsung in 2016, with the electronics giant integrating the technology into its QLED (Quantum-dot Light-Emitting Diode) televisions.

Coe-Sullivan claims that NS Nanotech's far-UVC chips are cheaper, smaller and more robust than the excimer lamps that are currently the only commercially viable source of far-UVC.

The solid-state emitters are best suited to smaller spaces as they are most effective at short distances while more powerful excimer lamps are more suitable for larger areas, although NS Nanotech expects to develop more powerful chips in future.

However, Coe-Sullivan said his new chip "runs cool, doesn't use any dangerous materials, can run on DC battery power, is very small, will be less expensive, and can be tuned to deliver a narrow band of far-UVC light."

"We are marketing it on a business-to-business basis to manufacturers who will design it into end products for lighting and disinfection applications," he added.

"The potential applications for human-safe far-UVC disinfection, in public and private spaces worldwide, would be nearly limitless."

Far-UVC is not a panacea, Coe-Sullivan cautioned. People should still wear masks, observe social distancing and get vaccinated. Far-UVC is most effective at close range and becomes less effective the further away the source is.

"The degree of protection it offers depends on your environment," said Coe-Sullivan. "If you are sitting next to an infected person in the middle seat of an airplane who is coughing and talking without a mask on, the viral load will be heavy, and the coronavirus germs may not all be eliminated.

"But if you are sitting at your desk at work and colleagues are several feet away, it should offer a much higher degree of protection."

Coe-Sullivan said NS Nanotech has been inundated with enquiries since it first announced its far-UVC technology in December last year.

"Far-UVC disinfection should work equally well inside or outside," he said. "Our initial products are designed for personal use, but we are already talking to customers considering development of arrays of our lights to create room-wide disinfection and protection for open outdoor spaces."

He added that getting regulatory approval "can be a maddeningly slow process".

"While regulators are not in opposition to the technology, they are going through a deliberate process to gather more research data before certifying its use in many public settings," he said, adding that new rules allowing greater use of far-UVC in public places are expected this year.

What is far-UVC and how does it help prevent Covid-19?

Far-UVC gets its name because it is at the far end of the ultraviolet (UV) part of the electromagnetic spectrum.

UV light is broadly classed into three types, moving from right to left on the spectrum: UVA, UVB and UVC, with UVC having the shortest wavelength (around 254 nanometres) of the three types. Since it has the highest energy, UVC is the most dangerous type of ultraviolet light to humans.

All UV light is capable of causing chemical reactions. For example, UVA, UVB and UVC can all damage human skin (sunburn is caused by UV radiation from the sun) and eyes, cause colours to fade and degrade materials such as plastics and wood.

UVC, known as "germicidal" UV, can additionally neutralise pathogens such as viruses by attacking the RNA that carries their genetic information, preventing them from replicating. But it cannot be used in the presence of humans.

Far-UVC has an even shorter wavelength of 222 nanometres and even higher energy, meaning it can neutralise viruses even more effectively. But its wavelength is so short that it is absorbed by the dead layer of cells that cover human skin, and by the liquid "tear film" that covers the eyes, before it can damage living tissue. This means it is harmless to humans.