The Luma Foundation has released the latest set of images of the Luma Arles arts centre in the city of Arles ahead of its opening on 26 June 2021.

At the centrepiece of the arts centre in the French city of Arles is a 56-metre-high tower designed by Pritzker Prize-winning architect Gehry.

The 15,000-square-metre tower will house seminar rooms, exhibition spaces, research facilities, an auditorium and a cafe for the arts centre, which was established by Swiss collector Maja Hoffmann in 2004.

According to the architect, the form of the base was informed by Arles's Roman amphitheatre and its upper levels recall painter Vincent van Gogh's Starry Night, which he painted in 1889 while at the nearby Saint-Paul-de-Mausole lunatic asylum. 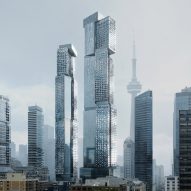 "We wanted to evoke the local, from Van Gogh's Starry Night to the soaring rock clusters you find in the region," explained Gehry. "Its central drum echoes the plan of the Roman amphitheatre."

Funded by a €150 million donation from Hoffmann, the Luma Arles arts centre is being built on a former railyard once owned by French national railway company SNCF that was left vacant in 1986.

Along with the tower, a series of existing industrial buildings on the site are being converted into exhibition spaces by New York-based Selldorf Architects.

The completed Luma Arles arts centre will be surrounded by a public park, named the Parc des Ateliers, which will be designed by Belgian landscape architect Bureau Bas Smets.

Canadian-American architect Gehry is one of the world's leading architects, with the Walt Disney Concert Hall in Los Angeles and Guggenheim Museum in Bilbao among his best-known buildings.

The architect is currently designing a pair of skyscrapers in Toronto and restoring the entrance and vaulted corridor at Philadelphia Museum of Art.

The main image is by Dronimages.