The female partners of Barcelona collective Lacol have been awarded the Moira Gemmill Prize for Emerging Architecture at this year's W Awards for women in architecture.

The Moira Gemmill Prize is awarded annually by the Architects' Journal and The Architectural Review in celebration of international up-and-coming designers, under the age of 45, as part of its W Awards.

Previous winners of the award, which is given in honour of late V&A design director Moira Gemmill, include the founders of vPPR, Mexican architect Rozana Montiel and Gabinete de Arquitectura's Gloria Cabral.

Spanish collective Lacol was established in 2009 and has a team of 14 designers. Its women members were selected for the award from a shortlist of four other architects, including the founder of Creative Assemblages, Nerea Amorós Elorduy, DK-CM's co-founder Cristina Monteiro and Verónica Villate, who co-founded Mínimo Común.

Among the collective's most notable projects in Barcelona is a housing scheme called La Borda and a co-operative workspace named Coòpolis.

It has also overhauled a 20th-century industrial complex in the Sants neighbourhood to create La Comunal, a complex containing workspace for several co-operatives, which includes its own office.

The panel said that Lacol was chosen for taking "architecture out of the traditional client-user commissioning relationship by politicising it – and it is remarkably effective".

"This alternative model of practice creates a collaborative bridge between communities and administrations," the group explained. "The possibilities this model heralds are fascinating and it is exciting to imagine that it could be extended to and replicated in other contexts."

Awarded in memory of American architect, writer, and lecturer MJ Long, the award recognises UK-based female architects that have excelled in practice.

Brownfield was selected in acknowledgement of her work and leadership on the studio's Kiln Place scheme, which is an infill housing project on a 1960s housing estate in Camden, London.

She was selected for the prize ahead of fellow shortlisted architects Ingrid Petit of Feilden Fowles, Naila Yousuf of Wright & Wright and Hannah Anderson of Walters & Cohen. 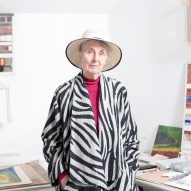 Both the MJ Long and Moira Gemmill prizes form part of the W Awards, which was formerly known as the Women in Architecture awards. The program recognises architects who identify as women and non-binary with the aim of encouraging "respect, diversity and equality in architecture".

While celebrating young and emerging talent, the awards also recognise the lifetime achievements of architects through its Jane Drew Prize.

This year, the Jane Drew Prize was given to Scottish architect Kate Macintosh in recognition of her contribution to elevating the profile of women in architecture. Macintosh, who is now retired, was chosen for her work in public architecture and advocating for the use of buildings as a tool for social justice.

Previous winners of the prize, which is named after modernist pioneer Jane Drew, include the likes of Denise Scott Brown and Pakistan's first female architect, Yasmeen Lari.