Wulf Architekten has created a sports centre for a school in Überlingen, Germany with a lattice facade and a folding zigzag roof that was informed by the mountains of the surrounding Alps.

The sports centre for the Überlingen School, which teaches 10 to 18-year-olds, was designed to create a contemporary space tailored to the needs of athletes and suitable for competitions and events.

The 5,600 square-metre design by Wulf Architekten is located on Lake Constance, which sits at the northern foot of the Alps.

“The geographic location was crucial in that it established associations within the semantic field of the nearby Lake Constance and the Alps, such as wind, clouds and mountains," Wulf Architekten founder Tobias Wulf told Dezeen.

"These were visual notions that guided our thinking at the beginning of the project."

The exterior of the white metal building is defined by its folding zigzag roof.

Its design was informed by the wide-span reinforced concrete trusses that ground the structure, but the studio also looked to tie the building in with the site's surroundings, both geographic and built.

"The shape of the roof also results from the wide-span supporting structure built as a reinforced concrete truss."

"Thus, it fits into the surrounding roof landscape with the Alps and Lake Constance as a backdrop, while simultaneously forging a distinctive identity," he added.

The studio wrapped the sports centre in an expanded-metal lattice shell to create a light and airy design.

Its front elevation is broken up by asymmetrically placed windows and covered by the white lattice shell, adding depth and subtleness to the facade.

“The idea was to give the sports centre an elegant appearance, so a white expanded metal facade was chosen,” Wulf said.

“The expanded metal shell harmonises the facade and gives it depth; the structure tends to dissolve. The facade is meant to appear light, airy and spherical. This also helps to integrate the large volume into the small-scale neighbouring buildings.”

The ground level is completely glazed, exposing the large concrete trusses that support the building and establishing a connection between the indoor and outdoor courts.

Recessed and cantilevered sections of the facade accentuate the building's two entrances, while concrete panelling frames the space and provides glimpses of the interior material palette.

"The glazed ground floor evolved from the idea of an openly designed building," Wulf said.

"It forms a transparent juncture to the public space with the adjoining schools and sports fields."

The sports centre's ground level contains the lobby, bleachers and a sunken three-court gymnasium, while the upper levels house ball sports and gymnastic halls as well as ancillary spaces.

A central atrium with a concrete staircase opens the space up and connects the different levels.

The interior spaces have a monochromatic grey and white palette. Exposed concrete covers the walls and adds a textural quality, while the same white metal lattice sheets that wrap around the exterior of the building cover the ceilings. 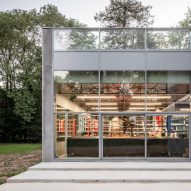 "The surfaces are meant to remain as raw as possible and the aesthetics are intended to be developed from the material itself. Therefore, grey and white are the dominant colours,” Wulf said.

Windows and openings in the walls and folding roof allow light to flood in, and a large frosted glass wall divides the gym spaces without compromising light flow.

Wulf Architekten was founded by Tobias Wulf in 1987 and is based out of Stuttgart, Berlin and Basel.

Other designs with zigzag roofs include this residential extension in Melbourne by Austin Maynard Architects, along with this project by Outpost that saw a terrace extension clad in zinc and topped with a zigzag roof.