Called The Buddy Holly Hall of Performing Arts and Sciences, the venue is dedicated to the late American musician Buddy Holly and is built in Holly's hometown of Lubbock, Texas.

Constructed on a site that lay fallow after a 1970s tornado hit Lubbock, the venue is a new-build that will formally open this summer.

The Buddy Holly Hall's intricate facade is designed to shade the venue from Texas' extreme climate.

Brick with an iridescent glaze forms the lower volume. Higher up, the venue is clad with insulated metal panels that have deep interior sills to prevent the building's solar gain.

"We were inspired by the natural sedimentary layering of the region's canyon rock-faces, and so designed a horizontal pattern to the jointing and fenestration," said Diamond Schmitt Architects principal Matthew Lella.

"It's a very modern and geometric building."

A light-coloured porous screen wraps around the building's south side. This screen blocks direct sunlight and keeps the building cool, but allows visitors to see in and out of the venue's large glass windows.

"We chose materials and colours that would feel at home in the landscape that surrounds the venue," Lella told Dezeen.

On its east side, the building's facade and massing create a courtyard with a garden that is surrounded by the venue's restaurant, ballet studios and rehearsal and community rooms.

The Buddy Holly Hall's north and west sides form the venue's working area. Canopies shelter the stage door, as well as an entrance to the ballet studios and a loading dock.

"Though less ceremonial, we still wanted this side to be inviting," said Lella. "We provided as many openings as possible to allow natural light into the backstage areas." 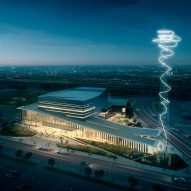 Inside the venue, visitors are greeted by a spacious lobby with a large white spiral staircase. The building's use of glass at ground-level links its outdoor and indoor spaces together.

"The guitar wall is designed as a colonnade that lifts to accommodate a marquee and ticket booth, a modern take on an old-school theatre entrance."

The venue's curved and well-lit Helen DeVitt Jones Theatre seats 2,297 spectators. Its versatile seating can be reconfigured to suit the venue's varied range of programmes.