Jean-Philippe Vassal, along with his Lacaton & Vassal co-founder Anne Lacaton, won the Pritzker Architecture Prize earlier this week. In this lecture, he explains the ideology behind the studio's work.

Exclusively filmed by Dezeen, the lecture was originally given by Vassal at the Royal Academy of Arts in London in 2019.

In the talk, the French architect outlines the core principles behind the studio's work, which is best known for social housing and a desire never to demolish.

Vassal explains the studio's processes by talking thorough several of the studio's key projects including the École Nationale Supérieure d’Architecture de Nantes (pictured top), its restoration of three social housing blocks in Grand Parc Bordeaux and conversion of a shipbuilding workshop in Dunkerque into a contemporary art gallery. 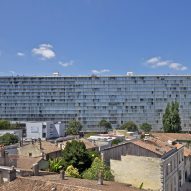 These projects contributed to the French pair winning the Pritzker Architecture Prize.

"Not only have they defined an architectural approach that renews the legacy of modernism, but they have also proposed an adjusted definition of the very profession of architecture," said the jury.

To mark the award, we rounded up ten of Lacaton & Vassal's key projects.