Vassal and his partner Anne Lacaton recently won the 2021 Pritzker Architecture Prize for their studio's body of work, which is based on its principle "never to demolish" and aims to refurbish, rather than rebuild, social housing.

This bonus episode of Face to Face features a previously unheard interview. It is conducted by Dezeen's acting US editor India Block, whom Vassal sat down with ahead of his lecture at the Royal Academy of Art in London in 2019.

Based in Paris, Lacaton & Vassal was founded in 1979. The studio has become known for repairing or renovating existing buildings to give residents more room and access to outdoor spaces, an approach Lacaton says is driven by the idea of generosity.

"Generosity is absolutely essential in any act of architecture, in any act of urban planning, I think we should be only pushed by this idea of generosity," Vassal said in the interview.

Repairing rather than demolishing

The interview was recorded after the practice was awarded the Mies van der Rohe award for their project 530 Dwellings, a social housing project in Bordeaux.

The project saw the renovation of a 1960s housing block. Instead of demolishing the building, the architects made interventions such as the addition of 3.8-metre-deep winter gardens, open-air balconies and bigger windows to every apartment in order to improve the quality of life of its residents.

"Just try to repair and add what is missing," said Vassal. "You will give much more pleasure than by rebuilding after demolition."

"We cannot just do the minimum," he added. "We have to really think of how to do the maximum."

Renovation is "first step towards sustainability"

Vassal argued that repairing and renovating existing buildings is the most environmentally sustainable approach architects can take.

"If we talk about keeping buildings instead of demolishing them, it's the first step towards sustainability; to make sustainable what already exists," he said.

He stressed the benefits of using materials that are already available to architects, including what he calls the "free elements".

"Using as few materials as possible, by keeping into account what is already there, working with natural and free elements, such as the air, the light and the sun." 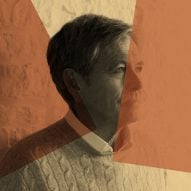 You can listen to the full series on Dezeen or on podcast platforms such as Apple Podcasts, Spotify and Google Podcasts.