A minimalist charred-wood extension, a garden studio wrapped in green terrazzo and an origami-inspired annexe are in the running to be crowned London's best home improvement of 2021.

A total of 22 projects have been shortlisted for this year's Don't Move, Improve! contest – an annual competition held by New London Architecture (NLA) in celebration of the "diversity and character of homes being redesigned" in the UK capital.

The awards programme is open to any home-improvement project that has completed in the last two years in any of London's 33 boroughs.

Among the other projects recognised in the shortlist are a revamp of a Walter Segal self-build house, a sculptural precast extension by Studio Ben Allen and a mountain-like addition to an Edwardian residence.

Office S&M's colourful remodel of a Georgian townhouse is also in the running, alongside a pink-hued concrete extension it has added to a home in Haringey.

While competing to be the overall winner, shortlisted entries can also win seven "special prizes". These include the Compact Design of the Year, the Environmental Leadership Prize and the Most Unique Character Award.

This year, there is also the WFH Design of the Year award, which will be given to the project that best supports working from home. 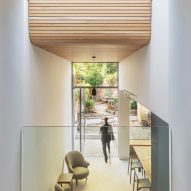 The judging panel for 2021 is headed up by NLA's curator-in chief Peter Murray and includes architects Amin Taha of Groupwork and Melissa Dowler of Bell Phillips.

The panel said that while this year's shortlisted projects vary in budget and briefs, each design is underpinned by an ambition to provide homeowners with functional and contemporary living spaces.

"We have seen projects that are muted and some with hyper-trendy futuristic colour palettes, in every case though, the top 100, and especially the shortlist have impressed us with the way in which they address the needs of the homeowner, which of course, is the most important function of a home," reflected Thomson.

Winners will be announced later this year at an invite-only exhibition. Previous overall winners include a double-height extension in Lambeth, a residence with a sunken Japanese-style bath and a home built within an abandoned chapel.

House in Hackney by YARD Architects

Mountain View, Bromley, by CAN

The Segal House, Lewisham, by Fraher and Findlay Architects

Two and a Half Storey House, Hackney, by Bradley Van Der Straeten Architects