Architecture studio Azab has revamped a farmhouse on the edge of the town of Loiu in Spain and divided it into homes for a woman and her parents.

Designed as homes for two generations of the same family, Azab split the former farmhouse in Bizkaia in the north of Spain horizontally. An apartment for the parents occupies the ground floor, with the daughter's apartment above.

The pair of homes have their own front doors, but share an access hall on the ground floor.

Created for the older couple, the ground floor apartment has two bedrooms alongside a large kitchen and a large living room.

All of the rooms have floor to ceiling windows that were designed to connect the home with the surrounding countryside and are covered with light, white curtains.

On the floor above, the daughter's apartment is arranged around the central entrance space that doubles as the home's kitchen and is lit by two angular skylights.

Around this central space are a series of six rooms that can be used as bedrooms, living spaces, dining areas or studies along with two bathrooms.

According to the architect the two homes were designed to complement each other, with spaces that can be used by the other family members. 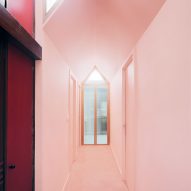 "The house on the ground floor opens to the outside with two large very marked rooms of dining room and living room in which to celebrate family meals or parties, while the upper house is a succession of rooms deliberately used," Berasategui told Dezeen.

"So that on a certain occasion the daughter may be able to use the parents' living rooms and the parents could house grandchildren or relatives in the rooms of the daughter's house."

Throughout the interiors, Azab combined the farmhouse's exposed concrete frame and lightly painted walls with flourishes of bright colour, mirrors and striped glass.

The upper kitchen, which is wrapped in a stripped-glass enclosure, has bright cabinets and a sky blue splashback, while the kitchen below is pink and crimson. Floors coloured blue and off-white were used to divide up the spaces and mark their uses.

"The interior of the house, unlike the exterior, navigates through some free patterns where the reds and pinks of the server furniture dot the calmer atmosphere with optimism," said Berasategui.

"The floors are great protagonists in the interior environment combined in two tones and changing their location on both floors trying to influence their antagonistic character."

In contrast to the interiors, the building's exterior is restrained with plain facades marked with a subtle diamond pattern that is only visible when the light is right.

"The rhombus pattern that wraps the entire facade is used to complete the distant image," said Berasategui.

"It is a compositional exercise that exalts the ornament in a subtle way, through a repetitive and little marked geometric pattern that only with a certain light can be sensed engraved on the facade," he continued.

"This allusion to the ornamental is a vindication of the identity or the tradition, of the popular and artisanal pride of the decorative always present in humble ways in the constructions of the field."

The studio previously created an apartment with a bubblegum-pink corridor and a forest green kitchen in Bilbao and used floor-to-ceiling curtains to carve up the interiors of another flat in the city.