A structural stone wall separates the social and private spaces within this two-storey family apartment in the old town of Vilnius, Lithuania, designed by local studio 2XJ.

Located in the city's Užupis neighbourhood, the 140-square-metre apartment occupies the second and third-floor attic space of a three-storey apartment building.

The apartment, which belongs to a young family who split their time between Vilnius and Vienna, previously had a "complex" layout dominated by a structural stone wall that ran the length of the apartment.

Punctuated by three arches on the ground floor, this wall reminded the architects of the Colosseum in Rome.

"It became a bit of a humorous point," 2XJ architects told Dezeen. "This complicated and immovable wall became known as the Colosseum."

As it was one of the apartment's main structural walls it could not be removed so the studio decided to turn it into a central feature by cladding it in slabs of Italian travertine "just like the real Colosseum".

This is also what led the architects to give the project its tongue-in-cheek name: Greetings From Rome.

"Our main goal was to enhance the feeling of the old town in the interior by modern means, and the arch motif and the stone wall served this purpose perfectly – it became the axis of the project," said 2XJ.

"We decided to highlight this wall and create the home around it, to separate the house into active and restful spaces. We knew that if we solved the wall issue properly, the project would be a success."

On a practical level, the wall separates the social and private spaces on the lower floor by dividing the plan into two zones – a main living area with an open plan kitchen, living and dining area on one side and two children's bedrooms and bathrooms on the other.

From the main living space, the owners can access a small home office that can be closed off with sliding doors, as well as a large terrace with a view of Vilnius's baroque churches.

Built-in storage is incorporated into a hallway that runs between the children's bedrooms and the stone wall.

The apartment's upper level houses the primary bedroom, a small bathroom and a landing area that functions as a library for the owners' large collection of books. 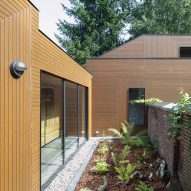 To complement the wall, the architects chose a neutral palette of white, natural wood and travertine throughout the apartment.

The staircase that links the two floors is divided into two parts, with a "monumental" wood section at the base and the rest made from white-coloured steel.

"The monumental part has a connection with other objects, such as the dining table and console," explained the studio.

"The upper part was designed to create a feeling of lightness and to save space. All of these elements create a link with the main stone wall."

The arch motif is repeated in smaller details throughout the apartment such as the custom door handles, dining table and other curved furniture.

Elsewhere in Vilnius, a number of studios have used similar techniques to modernise old, 19th-century apartments. ŠA Atelier inserted bright white and natural wood partitions to divide the space in one family home, while in another interior designer Kristina Lastauskaitė-Pundė turned the existing arched doorways into a central feature.

Photography is by Darius Petrulaitis.