Eco research lab Finding Infinity has been working with architects, investors, developers and councils on a concept to transform Melbourne into a zero-carbon city by 2030, and has unveiled 15 prototypes that could make the plans a reality.

Melbourne-based Finding Infinity has spent the past two years developing A New Normal, a 10-point strategy for the Australian city to become completely self-sufficient in terms of energy, food and water, and to also be zero-waste.

According to studio principal Ross Harding, the plans would not only improve the city's environmental credentials, but also make it more profitable. He claims a switch to clean energy, water reuse and a circular economy would provide over 80,000 jobs.

"It's a $100 billion transformation of the city that would pay for itself in less than 10 years," Harding told Dezeen.

For Melbourne Design Week 2021, running from 26 March to 5 April, Finding Infinity has teamed up with some of Melbourne's leading architects to show how the city's physical environment could change as a result.

The designs – which include a sewage treatment plant that doubles as a nightclub, and community hubs in converted multi-storey car parks– explore how sustainable technologies could make the city a more healthy and enjoyable place to live.

Prototypes and pilot versions of these proposals are on show in an exhibition within a former office building at 130 Collins Street. A series of talks have also been talking place in the space, which have been live-streamed to a digital audience.

"We wanted to try and find a way to unlock this strategy," explained Harding.

One of the proposals, developed by John Wardle Architects, looks at activating Melbourne's unused rooftops.

It suggests that, by installing canopies made out of solar-energy-harnessing photovoltaics, these spaces could be used for co-working, community gardening, learning or events. At the same time, they could help to power the city.

"Melbourne has only implemented one per cent of its total solar energy potential. We worked out that, if you put solar energy on every second rooftop, it would generate 40 per cent of the energy the city consumes," said Harding.

A team led by Grimshaw has designed "an electrified vehicle pit stop" where people can take their cars to be converted to electric, while Foolscap has looked at upgrading the rail network as a food and drink destination, to encourage people to use trains rather than air travel. 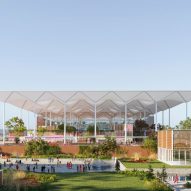 Wowowa suggests installing anaerobic digesters at sites including Fitzroy swimming pool, where it would convert food waste into biogas that would heat the pool and sauna. Similarly, 6 Degrees wants to use the waste generated by Queen Victoria Market to power a moonlight cinema.

Other proposals include a museum that makes non-recyclable waste a spectacle of the past, existing buildings refurbished to meet Passivhaus standards, a social enterprise that teaches repair and reuse, and a hub of solar agriculture in Latrobe Valley.

They are all available to view in detail on the A New Normal website.

Both the strategy and the 15 design concepts were developed in response to consultation with councillors across the 31 municipalities of Greater Melbourne. The next step is to find investment to bring these projects to life.

"These 15 projects unlock $100 billion transformation," said Harding. "The main hook is that we're not just talking about these projects; we're trying to find $50 million by the end of the year to build them at full scale.

Harding believes that, following both the recent bushfires and the Covid-19 pandemic, people in Melbourne are more open than ever to the idea of systemic change.

He argues that the only barriers to making these concepts a reality are cultural and political, rather than financial or technological. So by proposing ideas that build on the existing culture of the city, he believes the ideas would be welcomed by citizens.

"Instead of around blaming the government for not doing enough, we can make it easy for them," he said. "We can transform the city to be completely self-sufficient and we can all profit from it."

The exhibition title, A New Normal, is intended to reiterate this idea that a more eco-friendly city can be better for everyone.

"A New Normal is not about Covid," Harding added. "We need to create a new normal with a city that had no negative impact on the environment. That's normal."

A New Normal is on show from 26 March to 5 April 2021 as part of Melbourne Design Week. See Dezeen Events Guide for an up-to-date list of architecture and design events taking place around the world.