Dutch architecture firm UNStudio has revealed its design for an office in St Petersburg, Russia, which will contain an atrium that rises diagonally through the building.

The office will be built alongside JetBrains'two existing buildings and will be comprised of two stepped volumes unified by a gridded facade.

This gridded design will be created from protruding ceramic panels, which both reflect the light and provide shade to the interior.

The two volumes will be divided by a zigzagging glass wall that stretches diagonally across the entire central part of the building and contains a large multi-level atrium, which stretches up to five storeys at its highest point.

The upper part of the building extends over the atrium to provide shade to the interior.

Inside, the lobby will incorporate large planters, green walls and hanging plants, and open up towards the atrium. 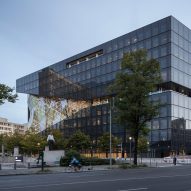 The stepped atrium is at the centre of the design and will form the core of the office, with the aim to create flexible workspaces as well as spaces for social interaction.

Meeting rooms, breakout spaces, auditoriums and a restaurant will all be organised along the atrium while winding bridges will extend across the open space and connect different parts of the design.

Office floors will largely be housed in the upper volume of the building and will be organised around both individual and team working spaces.

"We pay a great deal of attention to how people move through buildings," said UNStudio founder Ben van Berkel.

"Office spaces are designed in such a way that they do not create simple linear corridors leading to dead ends, instead, each corridor has a route that introduces a kind of landscape into the building," he continued.

"The possibility is created to take endless walks through the building, where there is a great deal of transparency, also towards the surrounding landscape."

The atrium's stepped design will extend from the interior to the exterior of the building to form a series of curved, staggered terraces and courtyards.

A courtyard on the ground level will connect UNStudio's design with JetBrains' existing office buildings, as well as provide the office with a gallery space that can be used as a winter garden for outdoor plants.

UNStudio was selected to design the office building for JetBrains after winning a competition in 2019.

Recently, the studio revealed its designs for a modular apartment block in Munich with reconfigurable interiors, while in 2019 it announced plans to connect Russia and China with the first-ever cross-border cable car.