Interior design practice Universal Design Studio has incorporated seating areas and terrazzo tracks into the lobby of an office building on the former site of a railway station at 100 Liverpool Street in the City of London.

Universal Design Studio fitted out the lobby within the Hopkins Architects-designed office block in Broadgate, London, to create a space that welcomes visitors and encourages people to linger.

"We wanted to facilitate a paradigm shift away from the archetypal corporate lobby experience – often stifling and alienating," said Paul Gulati, director of Universal Design Studio.

"Instead to create a crafted, contextual space that feels open, engaging and approachable with a strong focus on placemaking and fostering a spirit of community within the City of London," he told Dezeen.

Built adjacent to Liverpool Street Station, the lobby for the 10-storey office block will see large amounts of foot traffic during early mornings and afternoons.

Universal Design Studio's design aimed to balance the need for coherent routes for workers and visitors entering and leaving with creating a space that could be used throughout the day.

The large first-floor lobby space is accessed by two pairs of escalators from entry points on either side of the building, and has two sets of lifts that give access to the office floors above.

To guide people through the space, the studio created a system of terrazzo tracks informed by the building's location on the former site of Broad Street railway station.

"Working with data analysts we utilised pedestrian movement simulations in the main concourse to inform spatial planning and to allow optimal functional performance for the space," said Gulati. 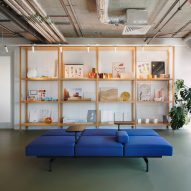 "Primary circulatory routes are mapped out in linear 'tracks' embedded in the terrazzo flooring, ensuring the continuous flow of people throughout the day remains seamless and intuitive," he added.

Alongside these primary routes, the studio created the building's main reception desk, a cafe and several informal meeting and flexible work areas.

These areas are defined by changes in floor colour and material and are intended to be used by staff throughout the day.

"Our concept focussed on creating a series of zones across the multi-level lobbies where people are encouraged to dwell for longer periods in more activated and alternative modes of working," said Gulati.

"The various zones each have a particular emphasis and accommodate informal meetings, focussed work, team collaboration and ample space for socialising."

Overall Gulati hopes that the various seating areas and workspaces will mean that the lobby is active throughout the day, so that it is a welcoming space.

"This kind of hybrid thinking should ensure that these public areas are usable and stay active throughout the course of the day – providing a lively environment rather than stark and alienating entrance spaces," he concluded.

The studio previous designed the interiors of its own office in Clerkenwell and a reusable pavilion for the BBC that was assembled in Cannes.