Casona Sforza, or House Sforza, is located in the coastal town in the Mexican state of Oaxaca.

The hotel was conceived by the entrepreneur Ezequiel Ayarza Sforza, who worked with Mexico City architect Alberto Kalach of TAX Architects to design the property.

The hotel – which offers 11 guest suites and a bar and restaurant – is set on a 4,500-square-metre site that looks toward the ocean. The property was designed to integrate with the landscape and to offer comfortable spaces for reflection.

"It places centre-stage the value of being aware – of contemplating and understanding the beauty of an environment in balance," said the architecture studio. 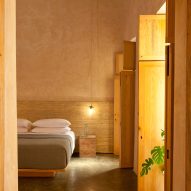 The resort consists of arched volumes of varying heights, which are arranged in an asymmetrical manner. The vaulted shape offers several benefits, including being able to withstand earthquakes and allowing positive energy to flow into the suites, the team said.

The volumes are constructed of local bricks – a material that helps keep interior rooms cool without the use of air conditioning. The bricks have a pale yellow hue that reflects sunlight and further aids in cooling.

The rounded forms overlook a circular swimming pool that is intended to enhance the property's tranquil atmosphere. A linear corridor runs through the centre of the hotel and terminates at the pool.

Guest suites were placed either high or low. Six are located on the upper floors and offer balconies with views of the sea. Five are at ground level and come with a terrace and private pool. All of the units have vaulted ceilings.

The interior design – overseen by Mexico City's MOB Studio – is meant to feel bohemian, with the use of earthy colours, tropical woods and handcrafted decor. It also draws upon the hotel's seaside context and distinctive architecture.

"Elements highlight the attributes of the site and the surroundings – such as the sunset, the sound of the ocean, and the movement of the breeze – and combine with the textures and colours of the architecture," the team said.

Much of the furniture and decor was made in Mexico. Rugs were woven in the small village of Teotitlán del Valle, and palm-leaf lamps came from the port city of Veracruz. Curtains, chairs and hammocks were fabricated in the Yucatán Peninsula.

The property also has many pieces, such as cushions and glassware, by artisans who are part of Pueblo del Sol, a community in Oaxaca that is focused on sustainability and indigenous culture.

Described as a social project, Pueblo del Sol is financed by Casona Sforza and is about an hour's drive from the hotel.

"Guests can visit the project to learn about where the products consumed in the hotel come from, experience the forest, and learn about building such a community from the ground up," the team said.

Situated along the Pacific Coast, Puerto Escondido is known for its palm tree-lined beaches and challenging surf spots.

Other projects there include a sprawling beach house by Anonimous that is made of concrete, parota wood and dried palm leaves, and a Japanese-Mexican restaurant by TAX Architects that features an open-air dining room and a large thatched roof. The area is also home to Casa Wabi, the famed artist's retreat designed by Tadao Ando.

Photography is by Alex Krotkov.