London studio Pearson Lloyd has called on designers to take on more medical and accessible design projects, as it revealed its design for an aesthetically appealing stairlift called Flow X.

Created for British mobility specialists Access BDD, Flow X is meant to not only be useful and technologically advanced but also to look attractive in the home.

Pearson Lloyd took on the project as it saw an opportunity to reinvent an overlooked and even stigmatised product – one that, according to the studio, people actively avoid installing even though this is detrimental to their health.

The studio is challenging the design industry to do more in this sector.

"Although medical products are essential to those in need, they are by their nature not aspirational," studio co-founder Luke Pearson told Dezeen.

"A large proportion of design press has historically focused on glamorous, seductive projects with mass appeal simply because they are fashionable or new."

He said that this, in combination with the fact that medical products are often complex and require lots of testing and expertise, made design studios reluctant to take on such projects.

"There is also the cliche that they often end up looking like medical products because the market finds comfort with this approach as a way to convince users of their purpose," he explained.

"Ironically this is often exactly what the users don't want. They want to be treated fairly like all members of society."

"In our view, products in this category require the very best design efforts to make them really effective and enjoyable," Pearson continued.

"Now that the world has shifted on its axis, we cannot allow our natural instinct for the new to drive our creative ambitions."

These perform several functions: they allow the chair to take up less space on the stairs when not in use, they cradle the user to give a natural sense of safety, and they rotate forwards to create a good surface for users to push up from or steady themselves on when sitting down. 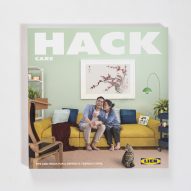 The arms open fully outwards on either side, so wheelchair users can slide across into the chair. The folding mechanism is either manual or automatic, depending on the model.

There is also a patented swivel mechanism that makes the chair and footrest rotate together, maintaining the optimal distance between the chair and the staircase and keeping the user from twisting their body.

Another feature of Pearson Lloyd's design is its use of materials that are suited to the home. The chair has a laminated timber backrest that should complement 20th-century furnishings.

Built into the folding arms, Flow X's controls are meant to be simple and intuitive to use. These include a joystick that can be easily manipulated by either the hand or wrist, and an emergency call button that can be linked to up to three phone numbers.

Pearson Lloyd's past work includes the Cross flat-pack chair for Takt, a research project into roomier aeroplane seating, and a hospital signage system that was found to reduce incidences of violence and aggression.

The studio was founded in 1997 by Pearson and Tom Lloyd and is based in East London.

More design for the elderly