A transparent facade will offer glimpses inside the Shenzhen Reform and Opening-up Exhibition Hall in China, which is being designed by Sou Fujimoto Architects and Donghua Chen Studio.

The 90,000-square-metre proposal was the winning entry of an international competition for an exhibition complex in Shenzhen's Futian District.

It was designed by Japanese studio Sou Fujimoto Architects with Chinese office Donghua Chen Studio to showcase the fact that Shenzhen is open to foreign businesses.

"The Shenzhen Reform and Opening-up Exhibition Hall will be built into a world-class, China-leading, and large-scale modernized exhibition complex with Shenzhen's characteristics," explained the studios.

"It will become a 'window' displaying and publicizing the achievement of reform and opening-up, a site welcoming significant guests, an institution collecting evidence and research materials, a landmark presenting an innovative and international modernization of the city, and a carrier showcasing the public culture and urban civilization of Shenzhen."

Externally, the Shenzhen Reform and Opening-up Exhibition Hall will have a layered, transparent facade.

According to the studios, this was designed to establish a relationship between the building and its surroundings and to echo its focus on the opening-up of China to foreign businesses.

Inside, the building will contain an exhibition area, educational spaces and research facilities. These will be linked by walkways that weave through a large lobby lined with trees.

Sou Fujimoto Architects and Donghua Chen Studio's intention is that this evokes a "garden in a box" and offers visitors a "village-like, fascinating indoor space". 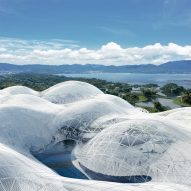 Once complete, the Shenzhen Reform and Opening-up Exhibition Hall will form a part of the Shenzhen Ten Cultural Facilities of New Era – a master plan involving the construction of 10 cultural buildings across the city.

Other venues include a science museum by Zaha Hadid Architects, an opera house by Jean Nouvel and a cultural centre by MAD and ECADI. SANAA has also designed a maritime museum with a cloud-like structure as part of the plan.

Sou Fujimoto Architects was established by Japanese architect Sou Fujimoto in 2000. Another new proposal by the studio is a seaside pavilion in Haikou, China.

It recently renovated a hotel in Japan by removing its internal floors and adding a grassy hill containing cabins and it is nearing completion on the House of Hungarian Music in Budapest.