Terrazzo, wood panelling and dark red steel feature throughout this renovated hotel in a Beijing hutong, designed by Fon Studio to echo the atmospheric quality of the surrounding alleyways.

The 800-square-metre Well Well Well Hotel is set inside a hutong – a kind of narrow alleyway found in the city's traditional neighbourhoods and formed by lines of single-storey courtyard residences.

Its ground floor and newly added first floor accommodate a dense layout of 13 guest rooms, arranged around a central double-height courtyard that is covered with a large gabled wooden roof.

When Fon Studio took over the project, the building was already under construction and had previously undergone several renovations.

"Initially, the original decoration was demolished," explained the local studio.

"We were attracted by the sophisticated wooden roof structure of this old house, which increased the richness and visual characteristics of the space."

The building's original roof is supported by dark red columns of reinforced steel, which also prop up the new first floor and the terrazzo staircase that can be used to access it via the courtyard.

"The large courtyard is not common in hutong houses," said Fon Studio, which was established by architects Jin Bo'an, Li Hongzhen and Luo Shuanghua in 2016.

"The orderly interior courtyard originally belonged to a traditional inn, decorated in every corner with the most popular Chinese elements." 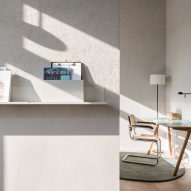 Clerestory windows encircle the top of the courtyard space on three sides, providing views over the tiled roofs of the surrounding buildings.

Both floors accommodate seating areas for guests and small corners for socialising and relaxing.

Fon Studio wanted the hotel's new additions – including partially remodelled doors and window frames – to be in keeping with the building's original structure and proportions.

"We respected the aesthetic style and structural logic of the original old building and performed a simple redesign to make it not much different," the studio told Dezeen.

"The structure of the staircase naturally becomes a visual focus in the space but its turning form and scale is still integrated into the overall atmosphere."

"In the way of atmosphere creation, the main visual colours are a combination of wooden logs and dark red under different grey textures," the studio added.

"It also abstracts and organises people's intuitive feelings in the alley – simple and delicate."

Walls are finished in textured grey cement and the compact rooms were designed to create a "simple and warm feeling".

Other hutong renovation projects include a specialist fan shop with a minimalist oak-lined interior and a teahouse with porthole windows set in a landscape of white gravel, terrazzo and marble.

Photography is by Fon Studio.