Hutong Filter is a studio added to a house in one of Beijing's traditional hutongs by architecture office Zai with pixel-style shingles and timber frames connecting to a communal courtyard.

Beijing studio Zai, founded in 2018 by Yihang Zhang, introduced additional functional spaces to a house found within a courtyard typical of the city's hutong neighbourhoods.

It is common for owners of this sort of property to erect basic brick extensions to increase their living space. This results in the courtyard being subdivided to form a network of narrow alleys.

With Hutong Filter, Zai aimed to avoid the sterile and insular feel of these ad-hoc additions by incorporating openings that retain views towards the courtyard.

"Hutong Filter seeks to find a balance between the need of the client to have privacy while not cutting off desired connection to the neighbours," said Zhang.

The addition, which occupies a section of the courtyard in front of the house's long elevation, contains a freestanding studio and an enclosed private patio.

Rather than creating a blank and anonymous brick structure, the studio chose to use dark slate shingles to clad the elevation and roof of the studio space.

"The grey colour and rough texture of the shingles references the traditional grey bricks in the surrounding buildings, blending easily into its context while preserving a sense of individuality," Zhang added.

The regularly shaped shingles are treated as pixel-like components that form a modular system and help to lend the structure a sense of uniformity. 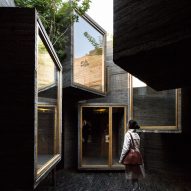 A stud wall provides the structural support for the shingles. Sections of the wall have been left exposed to create the desired sense of openness and connection between the house and courtyard.

A stud wall system was chosen for its ease of assembly and flexibility, which allowed the architecture studio to adapt it to the tight confines of its hutong site.

Stud walls also offered an opportunity to extend spacers slotted in between the timber studs beyond the plane of the wall so they become useful shelves.

This practical and space-saving storage solution is employed both inside the studio and on the wall lining the patio, which helps to ensure a seamless transition between internal and external spaces.

The studio's end wall is infilled with glazing to allow natural light to pour into the workspace. Timber sheets lining the walls and ceiling of this room match the traditional oiled finish of the framework.

Beijing's hutongs have been the site of several contemporary interventions aimed at modernising these traditional streets without compromising their historic importance.

Examples of innovative projects in the hutongs include a house enveloped by a paved surface that sweeps up from the ground, and a futuristic home featuring moveable furniture modules.