The Edersheim Residence, a house in New York State that was renovated and extended by American architect Paul Rudolph, is for sale and can be bought via an NFT.

Also called 862 Fenimore, the mid-century home in Larchmont, New York, is being auctioned on digital marketplace OpenSea for a minimum list price of one Ether (ETH), which is currently worth $4,055. The reserve price is hidden.

Originally built in 1958, The Edersheim Residence was altered by Rudolph for the first time in 1982, then again in 1989 and 1991.  Rudolph designed the pool house, an entrance to the main house, a porch and skylights, along with a complete interior renovation.

Rudolph, who died in 1997, is best known for his work in concrete and the brutalist Yale Art and Architecture Building in New Haven, Connecticut.

One of his residential projects, a 1950s beach house in Florida with a pulley system attached to a cannonball, went up for auction with fine art brokers Sotherby's in 2019.

He was engaged to redesign The Edersheim Residence, which was owned by Maurits and Claire Edersheim, after the architect revamped the couple's Fifth Avenue apartment in the 70s.

Now the house is up for sale and can be bought via an NFT, or non-fungible token. This is a unique unit of data kept on a blockchain, which can be used used to verify the ownership of something.

NFTs have exploded in popularity in recent months as a way of creating scarcity for digital artworks, which can be endlessly duplicated and are therefore difficult to buy or sell. The artworks are "tokenised", which means an NFT is created that acts as a unique digital certificate of ownership that can be traded.

But NFTs need not be limited to digital assets and now sellers are exploring using the technology to tokenise the exchange of real-world assets such as property.

NFTs, or a similar blockchain technology, could one day replace the way that property is bought and sold. But for now, the winning bidder of The Edersheim Residence will need to complete a traditional real-estate transaction to actually own the house.

The NFT is rather being used as a means to list the property on the OpenSea digital marketplace, which enables potential buyers to bid using cryptocurrency. 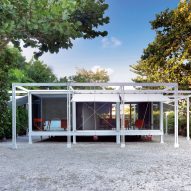 "The 862 Fenimore listing is priced in Ethereum with a minimum list price of one Ether and a hidden reserve," explained the selling team.

"Anyone with a wallet with one ETH in it can make a bid on the architecture. The winning buyer will contact the seller via their real estate attorney."

"The winning buyer's ether is transferred to the seller's wallet, who uses the proceeds to complete the transaction, and pay off the fees," they added.

Buyers can also still make an offer on the house in the traditional way, through a broker.

Some pieces of digital architecture have been offered for sale via NFTs, including a virtual design for a house on Mars and a video artwork of a house that will come with the physical property the art was based on.

NFTs have come under fire for their high levels of energy consumption. Musician Imogen Heap has decided to combat this by selling six audiovisual NFTs where the profit was used to offset the carbon released to make them.