Demolition of the Paul Rudolph-designed Burroughs Wellcome building in North Carolina has gone ahead, despite attempts to protest the destruction of the Brutalist landmark.

Heavy machinery has been photographed dismantling the former medical facility where AZT, the first antiretroviral drug approved to treat patients with HIV, was developed.

AIDS activists famously broke into and occupied the building in 1989 to protest the company's price gouging of the lifesaving medicine.

United Therapeutics Corporation obtained a permit to demolish the building in September 2020.

A spokesperson for the biotechnology company told local paper The News and Observer that the site will be cleared by April.

"The destruction of Burroughs Wellcome is a deep wound to this country's cultural heritage," the Paul Rudolph Heritage Foundation wrote in response to the news.

"That makes us even more committed to keeping urging, advising, and campaigning for the preservation and proper care of Paul Rudolph's architectural legacy."

The foundation launched a campaign to try and save the Burroughs Wellcome building last year, after receiving a tip-off that a demolition permit was being sought.

United Therapeutics Corporation, which obtained the building in a land deal with GlaxoSmithKline, had originally planned to restore the concrete building but decided it was too costly.

"We looked for ways to incorporate the building into our plans," the United Therapeutics Corporation spokesperson said in September.

"After conducting exhaustive studies, we have concluded that the building is unsafe, not environmentally sound, and functionally obsolete."

The Paul Rudolph Heritage Foundation argued that this failed to take into account the environmental impact of demolition over adaptive reuse, and the cultural significance of Rudolph's design.

Rudolph designed the building to be adaptable, with hexagonal volumes that could be added to over time.

Also called the Elion-Hitchings Building, the facility was commissioned in 1969 as the headquarters for the Burroughs Wellcome Company. The building was named for Gertrude Elion and George Hitchings, a pair of chemists who won the Nobel Prize for Physiology or Medicine in 1988 for their work on discovering new ways to develop drugs. 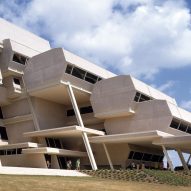 Azidothymidine, or AZT, which was developed in the building, was initially created by scientists for the Burroughs Wellcome Company as a cancer treatment, before being approved for use in treating AIDS patients.

But the Burroughs Wellcome Company set the price of AZT at $10,000 per patient per year, putting it out of reach of the vast majority of HIV patients.

AIDS activist group ACT UP organised protests against the pharmaceuticals company, including barracading themselves inside an office of the Rudolph-designed headquarters in 1989. The price of AZT was subsequently lowered to $6,400.

The Burroughs Wellcome building also occupied a place in popular culture. Its futuristic interiors and exterior served as a set for the 1983 science fiction film Brainstorm, which starred Christopher Walken and the late Natalie Wood.

Despite the loss of this historic building, The Paul Rudolph Heritage Foundation swore it would only work harder to protect the architects' surviving works.

"After so much writing and pouring over drawings of the building, it feels like losing a family member," said the foundation.

"But there are other Rudolph designs — right now — that are threatened, such as the Boston Government Service Center," it added.

It is not the first building by the architect to be lost to the bulldozers. In January 2020 demolition work restarted at the Paul Rudolph-designed Shoreline Apartments in Buffalo, after work was halted in 2018 when a resident refused to move out.