It envisions a digital screen that could be lowered to form a canopy for the cars below during daytime, then raised at night to become a cinema screen where people could watch films from their cars.

At weekends, food trucks could be parked at the forecourt to create a street food market.

"Because it can take up to an hour or more to fully charge an electric vehicle, the charging places should fulfil a broader set of demands than just the charge itself," said Woods Bagot.

"What does the driver do while he or she is waiting?"

The studio suggested the forecourt could also be used to hold classic car meets, to connect California's history of car culture with the next generation of transportation.

"The team was inspired by the powerful place that gas stations — and automobile culture generally — have long held in the American imagination, and above all in Southern California," said Woods Bagot.

"Everything from the paintings and photomontages of Ed Ruscha, to memorable film scenes in Back to the Future and countless Hollywood features, to innovative mid-century modern gas stations around the Los Angeles region." 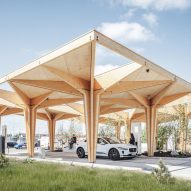 Woods Bagot included a modular floor in the design in preparation for future technological developments that could allow for contactless charging.

Currently, electric vehicles must be plugged into an electricity supply to charge.

Re-Charge LA was originally designed as part of Pump to Plug, a 2020 symposium organised by the Los Angeles' chief design officer Christopher Hawthorne.

Pump to Plug called for firms to come up with ideas for how to integrate electric vehicle charging stations in the city's Downtown area.

The US is about to start a building spree for these new kinds of stations. In September 2020, California governor Gavin Newsom announced that all new cars and passenger trucks sold in the state will need to be zero emissions by 2035.

More concepts for electric vehicle charging stations include spreading timber canopies by COBE and Ennead Architects' idea for roadside towers that could stack cars up as they charge.