The future of Grenfell Tower, the site of a high-rise fire that killed 72 people in London four years ago, will be decided this summer, according to a letter sent by the UK government.

The ministry of housing, communities and local government (MHCLG) wrote a letter to residents earlier this month updating them on the timeline for the decision-making process.

"Following important advice from structural engineers about the condition of the tower, we need to consider this summer if, and when, the tower should be carefully taken down to maintain safety," said the letter, which was signed by the MHCLG Grenfell site director Alistair Watters.

"This is so that we can plan for this as part of the ongoing safety works taking place within the tower."

What to do with the tower remains controversial. In a conference call between the government and relatives of victims last Friday, there was opposition to the idea of demolishing the site where so many people died, according to a report by the Guardian.

Over the weekend, some relatives threatened legal action if plans to take the tower down went ahead.

"Nothing is more powerful than an idea whose time has come"
Out of darkness into the light. We pray to see this transformation.
But they do not talk to us who lost our kin. #hillsboroughcharter@RobertJenrick @JustinWelby @clarencehouse@kewgardens https://t.co/hbSLzuRnc8

Action group Grenfell Next of Kin, which represents 29 of the fire's victims, has suggested planting 72 species of plants in the ruin and letting it be taken over by nature.

The idea came from the work of Italian architect Stefano Boeri and his vertical forests – residential tower blocks covered with planted balconies.

Survivors will be included in the decision

The letter stated that it would be another year before any demolition work would go ahead. Local residents will be invited to meetings to discuss with the ministry and the structural engineers.

"We want to ensure bereaved families, survivors and residents have access to the information that will inform a decision on the tower before it is made," added the letter. 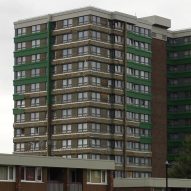 The Grenfell Tower disaster occurred on 14 June 2017 when a fire broke out in a flat. Flames spread through a recently installed cladding system around the sides of the 67-metre-high residential block, trapping residents inside.

An official inquiry into the fire is still ongoing after it paused last year due to the coronavirus pandemic.

News comes after another cladding fire

The news about the tower's fate comes as a fire in another tower block in the UK capital with similar cladding almost ended in tragedy. A fire broke out at New Providence Wharf in London's Canary Wharf neighbourhood on 7 May 2021, injuring 44 people.

Grenfell United, a group of survivors and bereaved, said it was "horrified" by the news.

"When will the government take this scandal seriously?" said Grenfell United. "The government promised to remove dangerous cladding by June 2020 — it has completely failed its own target and every day that goes by lives are at risk."

Earlier this year the Royal Institute of British Architects' fire expert said she was "frankly shocked" at the government's minimum height limit on buildings eligible to receive funding to remove dangerous cladding.

Main image is via Wikipedia Commons.