The Royal Institute of Britsh Architects has criticised the British government for its "naive" decision to only fund the removal of Grenfell-style cladding on housing over a certain height.

RIBA fire safety expert Jane Duncan said she was "frankly shocked" that there will only be funding to remove dangerous cladding material from buildings over 18 metres (six storeys.)

No funds for lower buildings

"Whilst additional funding to speed-up cladding remediation on residential buildings above 18 metres must be welcomed, I am frankly shocked by the Government's continued underestimation of the scale of our building safety crisis," said Duncan.

Jenrick said he had consulted with fire safety experts and concluded that buildings between 18 and 30 metres high should be prioritised.

Leaseholders living in buildings between 11 and 18 metres will have to take out a government-backed loan to cover the cost of removing cladding deemed to be a fire risk in the aftermath of the Grenfell Tower fire.

Developers of residential properties will be taxed £2 billion over 10 years to contribute to fixing subpar cladding.

"Fire does not discriminate by height"

But critics including the RIBA have argued that the government must do more.

"Fire does not discriminate by height," said the RIBA fire expert.

"By only agreeing to fund removal of dangerous cladding on high-risk residential buildings above 18 metres, and offering a second-rate loan scheme to the desperate owners of buildings above 11 metres, policymakers are continuing to fail thousands of vulnerable people," Duncan continued.

"We await further detail, but it would be naive to think these measures alone will solve the terrifying reality that so many people living in unsafe buildings face through no fault of their own."

"Another Grenfell could happen"

Grenfell United, which represents the survivors and bereaved of the disaster, said the government announcement was "too little too late".

"Another Grenfell could happen at any time," warned the organisation.

"Residents living in unsafe homes will go to bed tonight worrying if their building will qualify or be left out once again. And bereaved and survivors of Grenfell will lay awake fearful that what happened to us could still happen again." 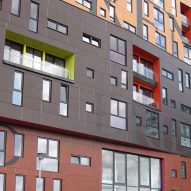 On 14 June 2017, 72 people died when the cladding on the 24-storey residential Grenfell Tower block in west London caught fire. The inquest, which is still ongoing, is currently hearing how cheaper but more flammable cladding panels were sold for use on the Grenfell renovation. Last year the enquiry heard how the lead architect on the project was unaware of the fire safety advice for tall buildings.

In the wake of the tragedy, at least 300 high rise residential buildings across the UK were identified as having similar aluminium composite material (ACM) cladding.

Replacing this material is expensive and homes deemed to be unsafe cannot be sold, so many homeowners are at risk of bankruptcy as developers are not obliged to fund the removable of flammable cladding.

Photo is by Dr Strauss via Wikimedia Commons.