The UK government has decided to demolish Grenfell Tower four years after a fatal fire tore through the block of flats in west London, following a report that states the building should be "deconstructed at the earliest possible opportunity".

Although the government has not officially announced the decision, ministers have decided that the burnt remains of the building will be "carefully taken down", according to The Sunday Times.

The news follows a letter to residents from the ministry of housing, communities and local government (MHCLG) earlier this year explaining that a decision would be made on the fate of the tower this summer.

In total 72 people lost their lives in the fire. Bereaved families have been told they can now expect a final decision later this month.

Deconstruction to commence "no later than May 2022"

The government's plan to demolish Grenfell Tower was informed by a safety report that it commissioned and published in May, reported The Sunday Times.

In the report, engineering consultancy Atkins said that the tower should be deconstructed as soon as possible.

"There is unanimous agreement and unambiguous advice from all the technical experts and engineers involved in the Grenfell project that the tower should not be propped for the medium to long-term but should be deconstructed at the earliest possible opportunity, with deconstruction commencing no later than May 2022," the report states.

"This advice is based on protecting the safety of those working in and living around the tower."

However, the government has previously assured the bereaved families that there will be no change to the tower before its fifth anniversary in June 2022.

Grenfell Tower was ravaged by fire in the early hours of 14 June 2017. The fire was started by a malfunctioning fridge-freezer, but spread rapidly across the 67-metre-high block due to its flammable exterior cladding.

The tower continues to loom over the neighbourhood in North Kensington, shrouded in protective sheeting decorated with a green heart.

Its site has been under the control of the ministry of housing, communities and local government since 2018 after the police released the site as a crime scene. An official inquiry into the event is still ongoing after it was suspended last year due to the coronavirus pandemic.

The news of its pending demolition has caused an uproar among survivors and bereaved families. Grenfell United, the organisation that represents them, said it was "shocked" by the plans. 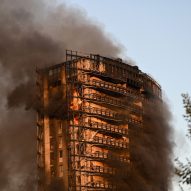 In a statement, the group said the Grenfell community accepted the removal of the tower, but that the demolition timeline should be decided by the "bereaved, survivors and the community, not the government".

It added that "fewer than 10 bereaved and survivors" have been consulted on the subject so far.

Marcio Gomes, a father of a stillborn baby that died as a result of the tragedy, described the situation as "inhumane and brutal".

"The future of the tower is the single most important thing for us in bring peace," he said.

Action group Grenfell Next of Kin, which represents 29 of the fire's victims, has previously suggested allowing the structure to be taken over by nature, inspired by the work of Italian architect Stefano Boeri and his vertical forests.

The news of Grenfell Tower's demolition comes after a fire broke out in a tower block Milan and engulfed its exterior cladding. The city's mayor Beppe Sala likened it to the Grenfell Tower fire in London. However, all of the residents who were in their apartments were safely evacuated.

The Grenfell Tower fire prompted a ban on all combustible cladding on buildings over 18 metres high in England and Wales. The ban prevents combustible material from being used on new residential buildings, schools, hospitals, care homes and student accommodation.

However, the decision to only fund the removal of flammable cladding on housing over a certain height was described by The Royal Institute of Britsh Architects (RIBA) as "naive". RIBA fire safety expert Jane Duncan said she was "frankly shocked" by the lack of funds for lower buildings.

"Whilst additional funding to speed-up cladding remediation on residential buildings above 18 metres must be welcomed, I am frankly shocked by the Government's continued underestimation of the scale of our building safety crisis," said Duncan. "Fire does not discriminate by height."