Architecture office Leckie Studio and design agency Aruliden have released designs for a series of mirrored structures that will be built in a forest in Ontario, Canada.

Called Arcana, the secluded cabin rentals will be built in an area of woodland two hours north of Toronto.

Their exact location is being kept secret and will only be revealed to guests once they have booked. With their reflective outer walls, the cabins have been designed to merge into the landscape.

Leckie Studio and Aruliden plan to build the cabins with a wooden frame and cladding covered in sheets of polished stainless steel.

Each cabin's interior will be lined with pine and feature floor-to-ceiling windows by the sleeping area.

The 275-square-foot buildings are designed to be almost invisible in the deciduous forest, allowing guests to feel as close to nature as possible.

The metal cladding will offer a slightly distorted reflection to prevent birds from being hurt by accidentally flying into it.

"As a brand that's rooted in respecting the power and beauty of nature, it's been a priority to design our structures so that they aren't a hazard to birds and other creatures that reside in Arcana's habitat," Leckie Studio and Aruliden told Dezeen.

"It's difficult to distinguish in the artist renderings, but the reflective cladding is an imperfect mirrored surface, which is naturally a deterrent to birds."

"Additionally, we are applying film to all reflective surfaces that is unnoticeable to the human eye but can allow birds to identify the cabin as an object in the landscape," they added.

The cabins will have electricity and running water, but the designers have created an off-grid version that they could build in more remote locations in the future.

"To ease the transition from the hinterland to the heartland, we've designed them with basic luxuries, such as electricity and running water," said Leckie Studio and Aruliden. 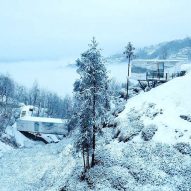 "There's a contemporary kitchen, a custom-built fire pit with grill situated on the private deck for all-weather alfresco cooking, and a private bathroom with a rainfall showerhead, and a carefully curated selection of amenities supplied from Sangre de Fruta."

Guests will be able to access the cabins with a contactless check-in, and the site will include facilities such as a sauna.

Tours of the 15 kilometres of wooded hiking trails around the cabins will be available, including foraging expeditions and guided forest bathing. Forest bathing, or Shinrin-yoku, is a Japanese health practice that combines mindfulness and walking amongst trees.

Construction is due to begin on the Arcana cabins later this year.

Vancouver-based Leckie Studio is also the founder of a company that makes flat-pack wilderness huts.

More mirrored buildings that blend in with nature include an off-grid cabin in Mexico and a hotel in China made from 18 mirrored cabins on a mountainside.