The historic Bourse de Commerce building in Paris is reopening after a restoration and redesign by Japanese architect Tadao Ando that includes a nine-metre-tall cylindrical concrete wall placed within its rotunda.

Located in the centre of Paris, France, the 18th-century stock exchange building reopens on 22 May following a major three-year transformation project commissioned by François Pinault.

The French businessman and founder of luxury group Kering commissioned Ando to revamp the space to show his collection of some 5,000 artworks.

Tadao Ando was tasked with giving the building a new lease of life as an art museum without altering the existing structure.

At the core of the redesign, a large 29-metre-wide, nine-metre-tall concrete structure was inserted within the walls of the glass-domed rotunda.

"I sought to set up a vibrant space appropriate for a venue for contemporary art by inserting, in a respectful manner, a new space within the old walls etched with the memories of the city," said Ando.

"I have inserted a twenty-nine-meter-wide cylindrical space bound by a nine-meter-high concrete wall into the circular building’s central rotunda – an aptly fitting feature for the city of symmetry."

On its ground level, the cylindrical concrete room houses a large exhibition space that is linked to levels above and below by concrete staircases that wrap around its form.

Staircases lead to the top of the nine-metre wall where visitors can walk along a circular walkway to better view the glass-oculus-roof, 19th-century mural and original interiors.

Below the exhibition space, the concrete staircases and monolithic load-bearing wall extend into the basement.

The curved wall outlines the plan of the space and forms a concrete foyer around a 284-seat auditorium. A black-box style studio was also added to the outer edge of the basement. 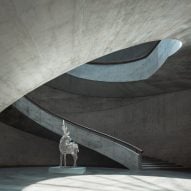 On the third level, the Bourse de Commerce contains a restaurant that overlooks the city and surroundings.

French designers Ronan and Erwan Bouroullec produced furnishings for the new building, incorporating wrought iron in the restaurant and placing metal benches across landings and open spaces of the main exhibition areas.

Originally built in 1767 as a corn exchange on the site of a demolished mansion, the Bourse de Commerce was later turned into a stock exchange in 1885.

A major renovation in 1886 by Henri Blondel saw a new external facade added and corinthian columns erected across the building. A mural depicting trade between the five continents of the world decorates the underside of the dome.

Recently Dutch architecture practice Kaan Architecten has concealed a minimalist wing within an existing 19th-century structure at the Royal Museum of Fine Arts in Antwerp, while Frank Gehry has designed a collection of new galleries and public spaces as part of the Philadelphia Museum of Art in Pennsylvania.

Photography is by Maxime Tétard unless stated otherwise.