Named Ten Degrees, the housing scheme is 135 metres tall and comprises 546 rentable homes, an art gallery and a cafe over two towers spanning 38 and 44 storeys.

The housing scheme is located near the East Croydon station and marks the gateway to the borough's plans for a new cultural quarter.

Ten Degrees incorporates almost 1,500 modules and was built in collaboration with Vision Modular Systems and Tide Construction, who manufactured the modular homes off-site.

HTA said that through using off-site modular manufacturing and construction methods, the studio was able to reduce typical carbon emissions by 40 per cent.

"Issues such as airtightness, thermal bridging, and quality of the finished construction can be dealt with by working with the manufacturers and solving technical problems early in the design."

Each of the tower's residential floors contains seven flats that range from one to three-bedroom homes. The homes include open-plan living spaces, floor-to-ceiling windows and Juliette balconies.

At the base and top of the housing scheme, HTA organised shared spaces such as a rooftop lounge, private dining spaces, a gym, social and leisure facilities, and co-working spaces. 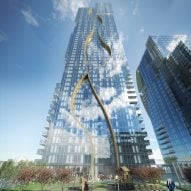 "Spectacularly tall" skyscraper by CZWG set to be built in Croydon

The exterior of the two towers takes on a multi-faceted geometric design that was informed by a collection of local mid-century towers, including the No.1 Croydon tower.

Glazed terracotta tiles cover the exterior of the towers to form a reflective bottle-green blanket across its facades.

Across the 38-storey tower, terracotta panels were organised to create a pointed formation between windows and perforated metal balconies that also reflect the angular design.

The 44-storey tower has a more minimalist look, with two panels combining to form a zigzag effect.

"The ambitious proposal for Ten Degrees to become the world’s tallest residential modular building was achieved through the confidence and knowledge that this same team had gained delivering what was then Europe’s tallest modular building," said Bayliss.

The Ten Degrees building is part of a major regeneration programme that will see 21 sites in Croydon deliver 10,000 new homes.

A number of projects have previously claimed the title of the world's tallest modular tower, including the Clement Canopy towers in Singapore.

Once completed, in 2026, the Avenues South Residences in Singapore will be 200 metres high and look set to become the tallest prefabricated skyscrapers in the world.

Photography is by Billy Bolton.