Bouygues Bâtiment International claims the development in Singapore has set a new record for the tallest modular tower.

Previously the title had been held by George Street, a 135-metre tower built in Croydon, England, by Tide Construction. The first high-rise modular tower was built in New York in 2016 by SHoP architects.

The module's structures are cast from concrete in a yard in Senai, Malaysia, then a factory in Tuas, west Singapore, carries out the fit-out to a nearly finished stage. 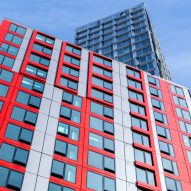 "Each module is around 85 per cent finished off-site, before then being assembled onsite," Bouygues Bâtiment International's head of modular construction Aurélie Cleraux told Dezeen.

"This includes, for example, the painting, windows frame and glazing, doors, wardrobes and MEP (mechanical, electrical and plumbing) including water and sanitary pipes, electrical conduits and ducting, which are all totally finished before the modules arrives on site."

Clement Canopy's concrete core was built at the same time as the modules were stacked and installed, in a carefully choreographed sequence.

"This method is definitely more eco-friendly," added Cleraux. "We were able to reduce waste onsite by 70 per cent and offsite around 30 per cent with a central materials and logistics platform."

Modular projects can be even more sustainable, Cleraux added, if materials like timber are used instead of concrete.

The towers' facades are made from rendered and painted concrete, with aluminium window frames.

Clement Canopy houses 505 two-, three- and four-bed apartments, with a swimming pool complex at the base.

Prefabricated modular housing projects are a way of building lots of new homes quickly in crowded urban areas. Metropolitan Workshop has built a 27-storey modular tower in London, and IKEA is bringing its modular housing system to England.

In Warsaw, architecture studio BBGK is bringing some of the first prefabricated housing to Poland since the Soviet era.

Photography is by ADDP Architects.