Fosters + Partners has restored and converted the Palazzo Marignoli in Rome into an Apple Store, uncovering historic features and opening up a central courtyard.

Apple Via del Corso is the largest Apple Store in Europe and occupies the historic Palazzo Marignoli, near the Piazza Colonna, in the centre of Rome.

The Apple Via del Corso building sits on a site that held a church and a convent in the 16th century.

The current Palazzo Marignoli building was constructed between 1873 and 1878 and served as a home for Marquis Filippo Marignoli. It also housed the Caffè Aragno, a famous gathering spot for artists.

Foster + Partners wanted to celebrate its history by highlighting its grandeur and restoring its historic features.

"The idea was to celebrate different aspects and various areas of the history of the building," said Foster + Partners partner Luis Matania.

"You have this juxtaposition of all these various areas in the building's history, through to now, the 21st century."

L-shaped in its plan, the building is organised around a large courtyard that the studio opened up to be used by the public and to greet visitors upon entry into the building.

Camphor trees placed across the courtyard informed by the 16th-century convent that previously existed on the site.

"The courtyard is no longer private, it becomes a democratic space that the community is invited to come through into and enjoy," said Foster + Partners partner Stefan Behling.

"We reintroduced trees as a reference to the old convent and it allows the community to come and enjoy this beautiful space."

Artworks by Italian artist Afro Basaldella from the building's art cafe days abstractly depict imagery and scenes of Italy were carefully restored and set into the walls.

Large early-1900s ceiling paintings by Fabio Cipolla and Ettore Ballerini have also restored and incorporated above the marble interiors between ceiling panelling. 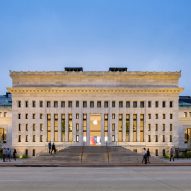 "It has been a complicated building and we have discovered things along the way," said Matania.

"It has been an evolving design process, that has amended and adapted as we found new things, new painting and new aspects of the architecture"

White marble was used throughout the interior of Apple Via del Corso, covering the floors of each room and framing large windows that provide glimpses into adjoining rooms.

To the west of the courtyard, a grand staircase with vast mouldings and a former oculus on its ceiling was restored, structurally reinforced and fitted with locally sourced Carrara marble.

The firm recreated daylight within the grand stairwell by adding LED lighting to the oculus that changes with the time of day.

On the first floor, a long corridor connects a forum space with a Genius Bar and three retail areas.

The forum-style space will be used for community events, occupying what used to be the Palazzo's ballroom a central point of the first floor.

Wooden furniture and joinery were used throughout to bring warmth to the interior spaces.

Dark wood-framed doors and windows along the corridors and edge of the rooms open out onto Juliette balconies and a terrace that overlooks the courtyard below.

Apple Via del Corso is one of many historic buildings the technology company has opened stores in, including the Foster + Partner designed Champs-Élysées store in Paris and the converted Washington DC library.