Architecture office MIA Design Studio has used a delicate lattice of timber battens and metal mesh to create this pavilion for architectural events in Thủ Đức in Vietnam.

Set within an area of parkland containing vegetable and fruit gardens alongside a canal, the studio turned to images of rural Vietnam for the form of the pavilion, which is designed to evoke a pile of straw.

"When we first came to the site, we immediately felt the presence of nature here, of various plants and greenery, and the need to assert it throughout our design," said MIA Design Studio.

"We decided to create a structure that can blend itself into its surrounding environment. Straw is an image of memory, one that belongs to the Vietnamese countryside."

The pavilion sits alongside an existing walkway, which crosses the canal via a thin bridge. The U-shape of the structure wraps around a small area of decking that serves as the platform for events.

While the design initially appears disordered, it is organised according to a grid, with parallel screens of metal mesh creating a skeleton into which wooden battens are slotted and tied perpendicular to one another. 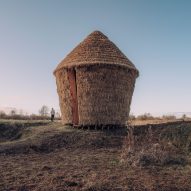 The result is a building that shifts depending on the angle at which it is viewed, both merging with and standing out against the surrounding greenery. Over time, the studio hopes that as the wood weathers the pavilion will further become part of the landscape.

"Straw is an entity that is able to completely blend itself into the natural context," said MIA Design Studio. "By not parading around shapes or materials, we hope that it is able to appear and disappear with time."

Based in Ho Chi Minh City, MIA Design Studio often looks for ways to incorporate nature in its designs.

In Saigon, the practice's Sky House covered a concrete home in protruding planters, and in Vũng Tàu the practice designed a home with plant-lined courtyards.