American architecture firm Kohn Pedersen Fox has unveiled plans for 343 Madison Avenue, a supertall skyscraper that will be built near Grand Central Terminal in New York.

Developer Boston Properties selected Kohn Pedersen Fox (KPF) to build the 1,050-foot-high (320 metres) office building, which will be located on the site of the former headquarters of the Metropolitan Transportation Authority (MTA).

Demolition work on the existing building has begun and construction is expected to start on the supertall skyscraper in 2022.

"The proposed design breaks up the building through the creation of recesses, notches and other terraces and further ensures that light and air will reach the surrounding streets and public spaces using these setbacks and recesses," said KPF.

KPF said there would be "opportunities for greening up to the full height of the tower" and renders show trees and other vegetation planted indoors at various levels of the skyscraper. 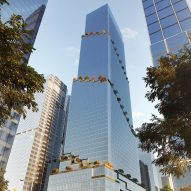 When complete in 2026, the skyscraper will directly connect to Grand Central Terminal, also called Grand Central Station, the third busiest railway station in the US.

As part of the project, Boston Properties is also funding an upgrade to the platform for the number Seven subway service at nearby 42nd Street station.

343 Madison Avenue will join many other supertall skyscrapers on the Manhattan skyline, including the nearly completed Central Park Tower by Adrian Smith + Gordan Gill and The Spiral by BIG in Hudson's Yard.

Renders by Volley Studio courtesy of KPF and Boston Properties.