Danish architecture studio Cobe has won the competition for the new University of Gothenburg library, with a design that evokes the pages of a book being opened.

The 16,000-square-metre library will be situated in the university area of Näckrosen near the centre of Gothenburg, Sweden's second largest city.

Cobe's design for the building has a cubic form, but with a slight curvature to the volume that is said to be informed by the shape of a book as it is opened.

The white facade, striped with vertical elements that act as a sun screen, further enhances the resemblance to stacked pages. This volume will be made from light ceramic panels and sit on top of a ground floor wrapped in floor-to-ceiling windows.

The design is meant to make the building feel open to the surrounding park while still standing out as a "beacon of knowledge" to all in the area, according to Cobe founder Dan Stubbergaard.

"The book serves as the inspiration and point of departure for the design — the building volume, its colours and materials all point to a book being opened," said Stubbergaard.

"Regardless of which direction you approach it from, you are invited in. The integration of the building and park was a key consideration from the outset, and we have deliberately preserved as much of the existing park landscape as possible."

The eight upper floors of the university library, which house the library itself, will be constructed from wood. As well as creating a studious, calming atmosphere, the material was chosen to reduce the building's carbon footprint.

This will be in contrast to the building's more open and active ground floor, which will be paved in granite with spaces demarcated by a visible concrete structure. 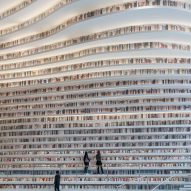 Eight striking libraries that are bound to impress

As well as providing a new setting for research and knowledge-sharing, the building will house the University of Gothenburg's existing humanities, arts, music and drama libraries.

It will include a fully automated book depository, the first of its kind in Sweden, that stores and retrieves books. The system will be visible to the public as they walk up or down the staircase, which wraps around it.

Cobe's design was chosen unanimously by the competition jury, which was made up of representatives from the client, publicly owned property company Akademiska Hus, alongside those from the University of Gothenburg, the City of Gothenburg and Architects Sweden.

Jury chair and Akademiska Hus project director Hayar Gohary said the design gave the university a distinctive building while also satisfying all of its needs.

"The proposal from Cobe is the single concept from the competition with the greatest development potential and displays a clear and unique identity," said Gohary.

"It adapts to the site's unique qualities while also meeting the specific needs of the University of Gothenburg."

Construction on the building is slated to start in 2025, with completion expected in 2028.

The University of Gothenburg will be Cobe's fourth project in Gothenburg. Among them is a development centre for the carmaker Geely described as a "chamber of secrets".

Visuals are courtesy of Cobe.