In this exclusive video produced by Dezeen, Sumayya Vally of Counterspace explains how her design for this year's Serpentine Pavilion references the architecture of London's migrant communities.

She described the pavilion as "a puzzle of many different elements" informed by buildings used by migrant groups across London.

In addition, five architectural "fragments" have been dotted around the city to bring the project directly to local communities.

Vally, director of Johannesburg practice Counterspace, is the 20th and youngest architect to have been commissioned by the Serpentine Gallery for its annual architecture pavilion, which was unveiled this morning in London's Kensington Gardens.

"I became really interested in places with a history significant to migration – small spaces that birthed community and that have held forms of cultural production over time," Vally explained in the video.

Among the spaces that influenced the design are the Fazl Mosque and East London Mosque, two of the first mosques to be built in London, and the Centerprise Publishing House, a now-closed Hackney bookshop and publisher of queer and black literature.

Other locations included the Four Aces Club in Dalston, a music venue founded in 1966 that was among the first to showcase black musicians, and the Mangrove, a legendary Caribbean restaurant and meeting place for Notting Hill's black community.

With many of these places no longer in existence, Vally says she hopes her pavilion and the research behind it will help to broaden our understanding of the architectural importance of these spaces, with the aim of protecting them from the threat of urban development in future.

"The challenge with spaces like this is that they sit outside of our architectural lexicon and of what we traditionally understand to be important architectures and important spaces of gathering and community," Vally said.

"When those spaces are under threat from development and gentrification, they are not protected."

"My hope is that the architectural community will read and understand some of the spaces that have brought the pavilion into being and that those spaces are at the forefront of our conversation about architecture going forward," she added.

The pavilion is made up of abstracted elements and details pulled from the various locations in the architect's research.

"Formally, the pavilion is almost like a puzzle of many different elements coming together," Vally said.

The result is a pink, grey and black structure comprising a series of columns and inbuilt furniture made from a steel frame wrapped in cement-treated timber and black-stained cork panels that cover its exterior.

Aiming to create a design with minimal carbon impact, the architect used repurposed steel from the contractor's previous projects and cork reclaimed from the wine industry.

Like all past iterations, this year's pavilion will be dismantled and relocated to its permanent location at the end of the summer.

Vally has also created five smaller structures from fragments of the main pavilion and dispersed them in different areas of London with a rich history of migration, in order to increase the reach of the project.

Satellite pavilions have been placed at locations such as New Beacon Books in Finsbury Park, The Tabernacle in Notting Hill, the Albany Arts Centre in Deptford and Valence Library in Barking and Dagenham.

"I hope that people will take the time to visit the pavilion and all of its five parts and to engage with the programming that will happen across the summer," Vally said.

As always, this year's pavilion will host talks and events including a sound programme called Listening to the City featuring work by artists such as Ain Bailey and Jay Barnard.

Youngest ever architect to receive the Serpentine Pavilion commission

Vally, who was recently named one of Time magazine's 100 leaders of the future, is the youngest architect to receive the prestigious commission.

Delayed from 2020 due to the coronavirus pandemic, the pavilion will open to the public on 11 June and run until the end of the summer.

"It's a wonderful gesture from the Serpentine to commission someone from my background and as young as I am to suggest what the future can be and can look like," Vally said.

Founded in 2005, Vally's studio Counterspace is based in Johannesburg, South Africa. 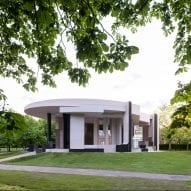 In 2019, the studio designed a large-scale installation made of coloured mirrors that mimic the effect of the light created by the pollution in the city's mine dumps.

Previous Serpentine Pavilions have been built by architects such as Frida Escobedo, Bjarke Ingels and Sou Fujimoto.

Next year's pavilion is set to be designed by American artist Theaster Gates.

Photography is by Iwan Baan unless otherwise stated.

The Serpentine Pavilion 2021 is open to the public in London from 11 June to 17 October 2021. Dezeen is live-streaming a talk with architect Sumayya Vally about the pavilion at 1:00pm London time on 9 June 2021. See Dezeen Events Guide for an up-to-date list of architecture and design events taking place around the world.