Swiss architecture studio Herzog & de Meuron has broken ground on its transformation and extension of a decommissioned power plant on the waterfront of San Francisco, USA.

The adaptive reuse project will convert the brick structure named Station A, which was built in the early 20th-century, into offices and workspaces.

It is being designed by Herzog & de Meuron with local office Adamson Associates Architects as part of a wider 29-acre (11.7-hectares) masterplan called Power Station, which will connect the industrial waterfront site to the Dogpatch neighbourhood.

The masterplan is being overseen by developer Associate Capital and will include 2,600 residential units and 1.6 million square foot (148,600 square metres) of workspace.

Some of these facilities will be housed in two new mixed-use buildings that are being designed by Foster + Partners.

"The reinvention of Power Station will bring new life to a significant building from the city's colorful past and will anchor this area as a destination on the San Francisco waterfront," said Herzog & de Meuron's senior partner Jason Frantzen.

"We are honored to continue our work in the Bay Area and look forward to realizing this important project." 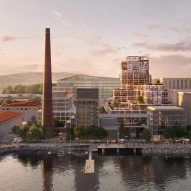 As part of the overhaul, the plant's old turbine hall will be retained and used as a large atrium-like space.

Here, the original platforms that once supported machinery will be used as walkways and lookout points.

Herzog & de Meuron will also preserve and repurpose the building's large foundations as supports for a new lightweight steel-framed structure above that will contain offices.

Externally, the new structure will be glazed and finished with shading louvres and openings for natural ventilation to reduce the need for artificial cooling.

Alongside homes and offices, the wider Power Station scheme will be complete with shops, restaurants and hotels along with seven acres of parkland.

It is expected that 30 per cent of total housing will be affordable, with 36 units dedicated to a homelessness initiative.

Herzog & de Meuron was founded in Basel in 1978 by Jacques Herzog and Pierre de Meuron. Other adaptive reuse projects by the studio include the Tate Modern in London, the Elbphilharmonie in Hamburg and the CaixaForum Madrid.