Chinese architecture studio LLLab used woven bamboo to create a canopy and a group of pod-like pavilions to shelter visitors to a light show set amongst the dramatic limestone mountains of Guilin.

Shanghai-based firm LLLab designed the bamboo canopy and pavilions for the site of the Impression Sanjie Liu light show, which takes place at night on the Li River in Yangshuo, China.

The show, directed by filmmaker Zhang Yimou and first staged in 2004, uses the river and 12 surrounding karst mountains as the backdrop for a performance of songs and special effects inspired by the legend of folk singer Liu Sanjie.

The island site used for the show already contained an entrance pagoda at one end, with the main stage at the other. LLLab's design is intended to activate the previously underused area between the entrance and the main stage.

The site was already largely covered with bamboo groves, so the architects developed a series of interventions that use bamboo as the main building material to complement the natural setting.

"As a means to coincide with what is already there, the new architecture looked at borrowing the materiality of the bamboo, reconfiguring it to form new space," said LLLab.

"In doing so, this new space means not to contest. Instead it aims to augment, albeit very gently, the surrounding bamboo groves and hills."

A series of woven bamboo lanterns line a path that guides visitors from the entrance further into the site. The lanterns increase gradually in size until they become pavilions that are so large that it is possible to step inside them.

Each of the larger structures is created using bamboo lengths with a diameter of between 50 and 80 millimetres. These are soaked and then scorched so they can be bent into the shape required for the upright and lateral members.

Skilled artisans then weave bamboo strands in a loose and random pattern to create a porous outer layer. An inner layer of clear polythene sheeting provides protection from rain or falling debris from the bamboo roof.

In the daytime, the lanterns appear as solid elements with a natural hue that complements their surroundings. At night, they are illuminated from within and seem to glow as light filters through the woven shell.

"As a whole, the lantern looks at home under the arching towers of bamboo in its peripheries," the architects added.

"Almost by chance, when looking to the distance the lantern silhouette is echoed by the stone towers of the Yangshuo, Guilin landscape strewn along the immediate horizon." 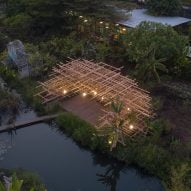 The second element added to the site is a woven canopy that meanders through the clusters of bamboo, sheltering parts of the walkway from rainfall.

The canopy is supported by angled columns concealed within living bamboo shoots that extend through circular openings in the roof.

Stretching 140 metres along the edge of the island, the canopy is designed to resemble an inverted landscape that dips down and rises up along its length.

In addition to providing shelter from the rain, the canopy acts as a sunshade, with its undulating surface creating different shadow effects as dappled light penetrates the structure from above.

In total, the canopy comprises four modules, with the two elements at either end containing content display points. Two central modules overlap one another, with the tallest section reaching a ceiling height of 4.4 metres.

The canopy also features integrated lighting that illuminates the pathway from above and increases in intensity as visitors move towards the main stage.

As well as its office in Shanghai, LLLab operates studios in Stuttgart and Porto. The firm works across projects of varying scales within the fields of architecture, design, art, urbanism, research and development.

LLLab has also worked on a hotel on the outskirts of Beijing comprising a village-like complex of brick and slate buildings.