SWA Group's design for a permanent memorial to those killed at the Sandy Hook Elementary School shooting in Connecticut has been given the go-ahead to be built.

Named The Clearing, the memorial in Newtown to 26 people killed during a school shooting in December 2012 was designed to be a commemorative garden.

"We wanted to celebrate the lives of the victims while honoring memory, love, and grief as living processes rather than endpoints," said Daniel Affleck of SWA Group's San Francisco studio.

"Seasonality, movement, giving, and growth are celebrated in the design and help to foster those processes," he told Dezeen.

The memorial will feature a series of paths that lead to a central clearing where visitors to the memorial can gather.

A circular water feature made from granite will stand at the centre of the clearing. It will be engraved with the names of the victims and channel water towards a young tree referred to by the studio as a "Sacred Sycamore".

The tree is intended to signify the growth of the community.

"The circle was a simple solution to make the space cohesive, but as a form with no beginning or end, it became a metaphor for wholeness and community," he told Dezeen. 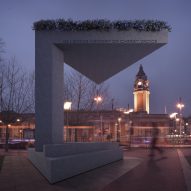 "The tree felt much more appropriate than any sculptural or representative object," he continued.

"It's dynamic, living, and will grow with the community. As it grows, it will represent the passage of time and the renewal of life."

Construction of the memorial is due to begin in August with the opening planned for 14 December 14 – the 10th anniversary of the tragedy.

SWA hopes that the memorial becomes a calm space to remember the victims of the shooting, which was the deadliest elementary school shooting in US history.

"Every decision we have made along the way was done with great care and empathy for the community of Newtown, especially the families," added Waldo.

"They wanted a space to celebrate and remember their loved ones, not a dramatic statement. This is why we focused on process and participation in the space," he continued.

"We expect visitors will feel a whole range of emotions – it is hard not to acknowledge the terrible truth of the tragedy, but we hope the space brings some sense of joy and optimism as well," added Affleck.