Ma's latest work, Light, is on a smaller scale than the ambitious architecture projects that his studio is well-known for.

The installation is an undulating lightweight steel structure clad in translucent fabric that shields a small copse of trees on top of a hill in a tea field near Hanxi Village.

The architect was inspired by the surrounding nature when he created the sculptural artwork, which is part of the Art at Fuliang 2021 festival.

"We looked at those mountains and the villages and we chose this spot on the hilltop of this tea field," Ma told Dezeen.

"And then we proposed our piece, Light – of the earth actually, because it's connected to the whole tea-field mountain."

During the daytime, the see-through fabric creates a sculptural encasing for the trees in the field, while at night the artwork is lit up like a lantern.

"There are several tea fields around the villages and I thought they were half-nature, half-manmade," Ma said.

"You see those ambulating contour lines around the mountain and they were so beautiful. There were a couple of trees on the hilltop and they felt like a sculpture themselves."

"What we did was to propose this fabric around those trees so they look like they're floating," he added. "We basically turned the whole hill into a light installation."

The installation is functional as well as decorative – it also works as a pavilion where people who visit the rural art festival can sit in the shade of the trees.

Ma explained that an artwork felt like a more appropriate addition to the village than a piece of modern architecture would have.

"There are many architecture activities around those villages too and we were actually more hesitant to do architecture there than art," he said.

"I think sometimes the most beautiful villages are beautiful because there is also some traditional architecture to form this overall image."

The piece is set to remain in the village after the end of the festival, which Ma believes will help form a bridge between the traditional village architecture and contemporary forms.

"The art is an interesting way to create this dialogue between the contemporary and the past," he said. 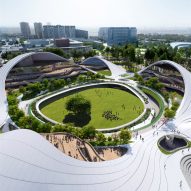 "Together with nature, the artificial language can bring something new, dramatic or spiritual to its location," Ma continued.

"I think architecture can also do that sometimes – bring emotion or quality to a certain place."

Ma created smaller, more art-like objects when he first started work as an architect and has previously collaborated with Olafur Eliasson on an exhibition.

He can still see an artistic quality in architecture. "I think architecture is art with certain functions," he said.

"Sometimes, when you create architecture you can't avoid that architecture brings more than just function to people," Ma added.

"It's not enough to only talk about functions; technical things; materials, because that's not something that everyone understands."

While Ma believes that architecture can be seen as intimidating because people can feel they have to understand it, he said creating an art piece reaches the public on a more emotional level. This is something that he also strives for in his work as an architect.

"When people feel it, you don't have to talk much, and sometimes they don't feel much – and that means the architecture failed," he said.

"I think that's also the reason I'm interested in public art; it's a little more risky than when you do architecture."

Ma has also recently completed another art project, the exhibition design for artist Liu Wei's Forma Fantasia as part of the Nine-Tiered Pagoda exhibition at The Pingshan Art Museum in Shenzhen.

This saw the architect design a dark room for the gleaming metallic artworks, illuminated only by a thin ray of light.

"When I looked at those objects I wanted to only design the light, because the form of those objects was very powerful already, very pure," Ma said.

"I didn't want to create more forms and I didn't want to place the objects in different positions. Basically, I threw those objects into the space without any order and I found they looked like floating planets in the universe," he added.

"I wanted to introduce this horizontal ray of light to give this feeling of an infinite universe to this boxy-shaped space."

The connection between art and architecture in Ma's work is also evident in an upcoming project by his studio MAD. It is currently working on the Quzhou Sports Campus in China, which is shaped like "green volcanoes," an architecture project that Ma compares to land art.

"It's a really large urban infrastructure with parks and a sports centre but there are no buildings – you don't see the architecture facades because they're all covered in green," he said.

"I think this will become a space for daily activities but with a little artistic feeling because those volcanoes are not natural, they become really large artistic land," he added.

"So it's become something more like art objects with functions in them."

The studio recently completed Cloudscape of Haikou, a sinuous library on Hainan, and unveiled its design for a three-venue civic centre in Jiaxing.

Photographs of Light and of Ma Yansong are by Tian Fang Fang. Forma Fantasia images courtesy of Pingshan Art Museum.

Light was shown at Art in Fuliang 2021 from 1 May - 1 June. See Dezeen Events Guide for an up-to-date list of architecture and design events taking place around the world.