Chinese architecture studio MAD has completed the Cloudscape of Haikou, a sinuous library and waystation that is cast in seamless white concrete on the coast of the Chinese island of Hainan.

The 1,000-square-metre structure, formerly known as Wormhole Library, is the first of sixteen pavilions being constructed in Century Park as part of a wider rejuvenation project of Haikou Bay.

Cloudscape of Haikou is distinguished by its amorphous, flowing form, in which the building's interior and exterior are cast as one vessel, without any right angles.

It is punctuated by large curved cut-outs that frame views of the sea, sky and land and allow natural light and air to enter, immersing visitors in nature and the coastal landscape.

"Spirituality is the core value of architecture," said Ma Yansong, founder of MAD. "It contributes to the humanistic atmosphere of a city," he explained.

"We want the building to be an urban space that people would like to make part of their daily lives. Architecture, art, humanity and nature meet here, and they will open up a journey of visitors' imaginations to explore and appreciate the meaning that different beauty brings to their lives."

The form of the building was achieved using a precise CNC-cut and 3D-printed formwork and double-layered waffle slabs on the floor and ceiling.

All electrics and plumbing are hidden within the concrete cavity to reduce clutter, while bookcases are recessed into the walls.

Inside, the Cloudscape of Haikou's library is divided into two zones by a large foyer. On one side is the library, while the other is a mixed-use facilities block. 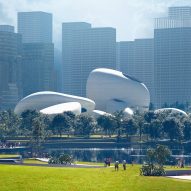 The mixed-use facilities form a waystation for visitors to the park and include a cafe, restrooms, showers, a nursery room, and bike storage.

The library encompasses 700 square metres and includes a reception area, office, flexible reading and event space alongside a children's area with alcoves and an intimate reading space overlooking the water.

These spaces are arranged around a central reading room containing 10,000 books, and linked together by curved sliding doors that retract into the walls.

Cloudscape of Haiko is complete with a large rooftop terrace and a pool and white-sand filled area at ground level.

The sixteen coastal pavilions that are being constructed along the coast of Haikou Bay are being overseen by the Haikou Tourism and Culture Investment Holding Group and are known collectively as the Pavilions by the Seaside.

The Cloudscape of Haikou was one of 10 buildings in our roundup of architecture to look forward to in 2021.

It featured alongside Tadao Ando's revamp of the Bourse de Commerce in France and MVRDV's greenery-lined high-rise building Valley in the Netherlands.

Photography is by Archexist unless stated.